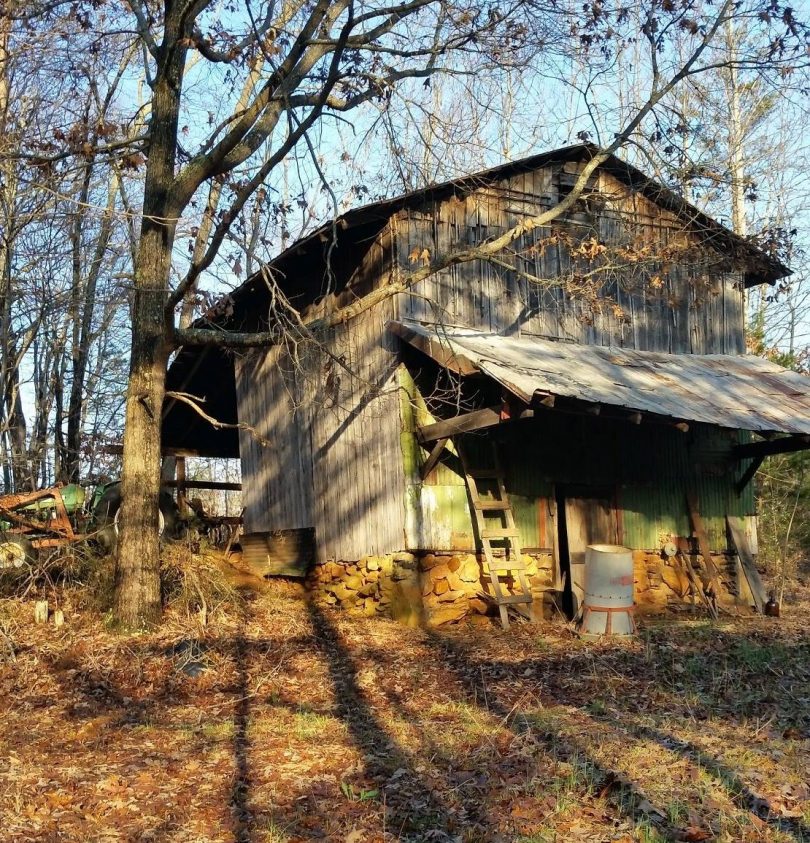 In our part of North Carolina you find old tobacco barns on the edge of just about any old field. Their design tells a story about our past. Dan Mason explains the architecture of these barns as we tour the tobacco barn in the Charlotte Brody Discovery Garden at Duke Gardens in Durham, NC.

Thank you to Garden Destinations Magazine for making this story possible.

As a service to our podcast followers, we offer a complete transcript of this show.

MASON
Welcome to the Triangle Gardener magazine podcast. We’re your guide to enjoyable gardening in North Carolina. Today’s episode  – Tobacco Vacations. I’m your host Dan Mason.   But first a word from Garden Destinations who help make this all possible.

You can find this and our other stories on the Triangle Gardener magazine website, trianglegardener.com.

You can also keep up with us on Twitter, @TriangleGarden.

Now, on with today’s story….

JENKINS
My parents smoked. One of the things I remember about our summer vacations was them in the front seat of the car smoking and me in the back seat gasping for air. My friend Dan has altogether different childhood memories of tobacco and summer vacations.

MASON
So as a child I took, and when I say “child” I’m remembering I was probably 9, 10, 11, 12.    Those years.  I took tobacco farm vacations which meant I went to my aunt and uncle’s house in NC and spent a week or two with them and worked with them. And I mean worked.  Harder work than I’d ever done before in my life.  They would pay me a little bit, so I made a little bit of money during the summer. And I got to know my family better and spend some good quality time with them.

JENKINS
I live in Durham, North Carolina.  Around here, when you get away from town, you start seeing them.  These odd little barns.  They’re taller than they are wide, often have a stone foundation, and they look dark —no windows, shut up tight. But if you come up close on them, sometimes you can catch this scent. There used to be one at the edge of a field that I’d walk past with my dog.  It was covered in honeysuckle vine and when that bloomed, the smell of the honeysuckle combined with the dusky smell of tobacco in a way that was intoxicating.  Pure southern summer.  The barn was pulled down last year.  Townhouses are going up now.   I asked Dan to give me a tour of the tobacco barn at the Brody Discovery Garden which is part of the Sara P. Duke Gardens.

MASON
Well, this building is a replica, I guess we would say, of an old tobacco barn.  Its been made from two tobacco barns that were in use but then went into disrepair as the tobacco industry declined. So they brought them here and constructed this barn here to honor that industry here in NC.

Its made out of logs and so, as you can see, they are all dovetailed together and there’s chinking in-between and that’s to keep it airtight. The tobacco farming industry dealt in curing tobacco and what that entailed was priming tobacco or harvesting the tobacco and bringing it into the barn all in one day and then stringing it up on sticks and putting those sticks up into the barn in different layers, layer after layer after layer.  Then once it was full cranking up the wood heat.  There were two big wood fireplaces here outside that you feed long poles of, usually pine, to create a hot intense heat right off the bat. That intense heat cured the tobacco leaves.  What I mean by “cure” is it wilted them.  Then once they were wilted they started bringing the temperature down. Still warm but not as hot as the beginning.  Slowly curing the tobacco.  Which turned it this wonderful golden leaf that we hear so much about —the Goldleaf tobacco.

When I started, as a little, little person in those ages when I started I was handing leaves.  Handling leaves.  What happens is so early, early in the morning and I remember this better than anything else.  Was getting up before the sun came up and I had never done that before.  My aunt would get me up.  She’d say, “Danny its time to get up.”  And I was like, “My eyes won’t open, they’re too sandy, I can’t get them open.  Its too early.”  And she’d say, well we’ve got to get up and go to work. She fixed breakfast.  Biscuits, eggs, ham.  A big breakfast that she’d fixed.  And then we went out and we’d start working.

Well all the adults men and some of the adult women would be the primers.  They were the harvesters.  So those words are interchangeable.  They would go out into the field with a slide, it would be a long, homemade wooden thing that would hold the tobacco once they picked it off the plant.  It was only as wide enough to get between each row.  And then a horse or a mule would pull the slide through the row.  So everybody would start at the same end and get a row or two.  Usually good primers could do two rows at a time.  And you’re just picking out the ripe leaves.  Putting them under your arm.  You get an armful and you’d take it to the slide, and you put it in the slide, and you’d go get another arm load.  You do that until you get to the slide full or you get to the end of the row.  When the slide gets full it gets pulled to the tobacco barn and it would get pulled.

Well right now we are standing right next to the barn, under the shed.  The shed is very important.  You notice it goes around three different sides of the tobacco barn.  Well its creating shade is the main thing.  A lot of work has to happen here too. So we talked about a lot of work going on in the field.  But here, the slide would pull up and be right next to the shed and under the shed would be the teenage girls, the adult women, and the children.  Their job would be to string the tobacco. So as handing leaves when that slide would come up and we would start working on that.  My job would be to get groups of three leaves and hand it to the stringer.  So the stringing activity was looping those bunches of three leaves together on a tobacco stick.  Now, I can show you inside what is called a “tobacco horse”. That’s where the tobacco stick rested while the stringer strung the tobacco.

MASON
Now, let me put my eyes on the “horse”…  there it is. It would be standing on the floor and as you can see at one end there’s a board with a V cut out of it.  Stick goes in that V and over here there’s another one.  But on this end there’s an additional board and what that board did was to either hold the ball of string or to guide the ball of string so you didn’t get it looped and tangled with anything else going on.  So you put a tobacco stick, which is about four feet long, and there’s some up there in the rafters that are stretched across.  That’s a tobacco stick.  You would hand the leaves to the stringer and she would string them on.  When that stick got full of tobacco then she would probably take it, or if you had extra help, you’d have one person who was pretty much doing that.  Taking off the filled tobacco sticks and going over and making a big stack of them inside the shade. Again, that’s why the shed is here.  So it will keep the tobacco in the shade because you can’t, if the tobacco were to sit in the sun stacked up like that it would start to basically compost.  It would start heating up too hot and fungus and that sort of thing would start to develop.  So you want to keep it cool.

JENKINS
Why did you have to dry the leaves, Why can’t the leaves be sold when they are fresh and green?

MASON
The leaf of the tobacco is big and broad and very fleshy.  If you’ve ever walked through a tobacco field, especially if you don’t have any shirt sleeves on you will feel the gum. The “tobacco gum” we would call it. It would come and it sticks on the hairs on your arms, or on your arms even if you don’t have hair, you will feel that sticky “gum”.  Well that “gum” is where all the nicotine is.  So that’s what we’re going for. What that drying process does is when we bring the healthy, living leaf pick it and bring it in and immediately that day get it in the barn, fire it and cure it.  Its similar to drying herbs.  You’re getting the moisture out of the plant leaf. So the fibers that remain and of course the “gum” that remains its pretty much in its same form but its reduced and the bulk and weight of the tobacco is much, much less.

MASON
My aunt Pauline, Charlie’s wife, as I said she was a short little woman, loved to cook, made the best biscuits.  Oh my God.  But she loved to laugh and she loved to make you laugh.  And so the whole family was pretty much that way it was a very fun-loving family.  One night after supper.  So we ate supper fairly early probably 5:00 or something.  And in the summer its daylight for a long time.  So we would go out in the cooler part of the day and do topping.  Especially if there was a field that was being cast in shadow.  So as the topping is not a strenuous thing it just has to happen, you get three or four people going down three or four rows and we would sing.  We would sing country songs.  We would tell stories, and all sorts of things.

And I remember one time, it was my aunt Pauline and my cousin Julia and Rosemary and we were just laughing and having a good time.  And topping the tobacco and I had the hiccups.  Because we’d just eaten summer and I had the hiccups.  And they just wouldn’t stop, wouldn’t stop.  So finally my aunt Pauline thinking, okay I’ll show him.  She planned it and I don’t remember exactly how it was, but she came up next to me in her row and she said, she told me there was a snake in the row.  And I jumped and screamed and ran and didn’t have the hiccups anymore.  We laughed and laughed and laughed.  And I remembered one of her dying thoughts to me when she was passing away 3, 4 years ago. Was she said, you remember that time that I scared the hiccups out of you with the snake story.

JENKINS
The stories, well that’s pretty much what’s left for many farming families.   Until the1990s, tobacco’s cultivation and processing was the backbone of our state’s agriculture. Since the federal tobacco buyout in 2004 the number of farms raising tobacco in North Carolina has decreased but the acreage under cultivation has remained fairly constant. Bigger, mechanized farms enable the US to be the fourth largest tobacco-producing country —following China, India, and Brazil. In 2012 the United States produced nearly 800 million pounds of tobacco. Dan says his uncle produced a few hundred pounds of tobacco each year and sold it at the local market.  Today, most of North Carolina’s tobacco crop is exported.