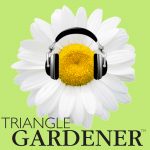 The River Birch, Betula nigra, is a native tree with many charms.  It transplants easily at any age, can tolerate our hot summers, and as its name suggests it likes wet locations.  With peeling white bark contrasting against its dark trunks this tree is an eye catcher in your landscape.  Named Tree of the Year in 2002, it can provide shade and erosion control in difficult locations.  Carol McPherson brings us a profile of the River Birch, a tree you may want to consider adding to your landscape.

Thanks to our sponsor Osmocote for making this episode possible

As a service to our podcast followers, we offer a complete transcript of this show.

Welcome to the Triangle Gardener magazine podcast. We’re your guide to enjoyable gardening in North Carolina. Today we are kicking off a series of stories about native plants. Carol McPherson is here with a profile on the River Birch tree. I’m your host Dan Mason.

Research has found that the best source of food for our native birds is, in fact, native trees.

But first a word from our sponsor who helped make this all possible.

I’m professional gardener and best-selling author Marianne Binetti and when I garden I worry about nothing because I use Osmocote plant food.  Osmocote is plant food with smart-release granules which feed your plants when they need it.  Never too much and never too little. Best of all, one application of Osmocote nurtures your plants for four full months.  Osmocote won’t burn your plants or easily wash away even if you over water.  Learn more about how you can improve your garden by visiting me at PlantersPlace.com

Now, on with today’s story….

Hello. I’m Carol McPherson and this is Tree Talk. Our focus today and in the upcoming segments will be on bird-friendly trees and plants. The National Audubon Society and the NC Native Plant Society have come up with lists of the best bird-friendly plants specific to our region in the Triangle—the greater area of Raleigh, Durham, and Chapel Hill. Research has found that the best source of food for our native birds is, in fact, native trees. Some of our birds pass through only during migration and want fruit.  A lot of our birds feed on insects and other birds are seed-eaters. So we want a variety of good host plants that will be beneficial to the largest number of birds.  Today we’re going to focus on a beautiful, unique native tree called the River Birch.

The Latin name of the river birch is Betula nigra. Betula actually comes from the Latin word meaning ‘to beat’, and refers to the traditional practice of using birch switches as a means of punishment. Ouch. Our current English word, birch, comes from the Old German word, bikra, meaning ‘bright’. This probably refers to the white-colored bark of many birch trees.

Birches have been on the earth for a long, long time. Birch fossils date from the Upper Cretaceous era, still in dinosaur times. They were most diverse in the Eocene period, around 45 million years ago. Today there are about 40 different species of birch in the United States, and the river birch is the southernmost one of all.

You can instantly recognize a river birch. They usually grow in clumps of three or more trunks and have the most wonderful, unusual bark. Botanists’ describe river birch bark in words that venture into the fields of poetry and art— Botanist Michael Dirr’s description of the bark reads as follows: “Thin, shining, cream, salmon, orange-brown, light reddish brown to cinnamon-brown, peeling freely.” The bark curls back on itself for the entire length of the limb, revealing inner colors of pastels. These birch trees are never white like the paper birch of the north, but have their own unique beauty. They usually grow to a height of 40-70 feet, although a champion tree in Tennessee measures 115’ tall. The leaves are alternate, dark green, shiny, and diamond-shaped with doubly-toothed margins. They turn yellow in the fall but drop soon after leaf-change.

River birch trees are monoecious, meaning that they have both male and female flowers on the same tree. Male flowers are up to 3 inches long, yellow-brown, drooping down. Female flowers are green and are borne upright. The male flowers grow in the fall, remaining on the tree through the winter, and producing pollen in the early spring. The female flowers grow in the spring and turn into fruit in May and June (cone filled with hairy seeds) after pollination and are dispersed by wind and water. The female flower yields a large number of tiny nutlets after it matures in April or May. The river birch is unique among the birches in that it fruits in spring rather than fall. This is a huge boon to birds and wildlife since it’s less common for trees to seed so early in the season.

River birch trees love moisture and grow wild along riverbanks and on swampy sections of land. The ripening of seed in late spring coincides with high water levels in swollen rivers, thus allowing the seed to be carried long distances by the water. The seed germinates quickly in the mud, thus allowing it to grow in areas where it helps to prevent erosion.  In a home landscape, the river birch will be very content in a moist location and will be able to thrive even in damp clay. The tree can tolerate pollution and compacted, oxygen-deprived soil so it is frequently used by landscapers in metropolitan areas or parking lots. The tree can tolerate periodic flooding but is not hardy during drought conditions. If the tree receives too little moisture, it will begin to drop its inner leaves.

The river birch has traditionally had many and varied uses. The Native Americans used to boil its sap and use it as a sweetener. The sap is distilled into a beer in northern Europe, Russia, and China. In Finland, the leaves are brewed to make a tea. Historically, a substance in the bark called betulin was used to help cure stomach ache and even today, pharmaceutical companies are investigating its use as an anti-tumor agent. Layers of peeled birch bark were used by the settlers as a cast for a broken arm or leg. Birch logs make wonderful firewood, as they will burn even when wet. But perhaps its greatest asset is its beauty as an ornamental. In the 1800’s, Prince Maximilian declared it the “most beautiful of American trees” and it was named Tree of the Year in 2002 by the Society of Municipal Arborists. It provides shade and erosion control and provides food and shelter for songbirds. If you live in a southern climate and you want a birch tree, this is quite possibly the only species of birch that will thrive here due to its excellent heat tolerance.

Another asset of the river birch is that it is the only variety of birch tree that is resistant, and quite possibly, immune to the bronze birch borer. The borer will cause wilting and dying of the upper crown, and extensive damage will finally result in the death of the tree. The river birch, however, is unique among its species in that it lacks rhododendrol, which is the chemical that attracts the insect to the tree.

OK, now to answer the question, ‘should I plant a river birch’? Absolutely! It transplants easily at any age and can adapt to full sun or moderate shade. It grows quickly and by shedding its bark constantly, is self-mulching thus preventing competition from weeds and unwanted plants. The peeling, multi-colored bark will be a visual delight in all seasons and its ripened nutlets will be welcome food for seed-eating birds. It withstands summer heat and soggy soil and provides beautiful fall color, albeit for only a short time. Is it a perfect tree? No. It is estimated that birch tree pollen in the spring is responsible for 15-20% of hay fever cases in the northern hemisphere. The roots are shallow and often become exposed, and it does have a habit of shedding its twigs and bark year-round. Pruning should not be done in the spring as the tree is a ‘bleeder’ and will produce copious amounts of sap where it has been lopped off. This will not hurt the tree, but may be unsightly. You should also be aware that the bark of a mature river birch does not peel and will be dark brownish-black although peeling will still be evident on upper, smaller-diameter branches.

Many cultivars of river birch have been developed. If you want a tree that has a paler, whiter bark, you may want to choose City Slicker or Dura-Heat. For copper-bronze bark, you may want to look at Northern Tribute or a cultivar named Cinnamon Bark. The cultivar that seems to get the most rave reviews is Heritage, said to have earned a place in the birch hall of fame!  Whichever river birch you choose, you will most likely be very pleased with the tree and our local birds and wildlife will be even happier!

This is Carol McPherson. You’ve been listening to Tree Talk.

You’ve been listening to the Triangle Gardener. You can find and past episodes of our podcast at our website, TriangleGardener.com.  Triangle Gardener, we’re your guide to enjoyable gardening in North Carolina.