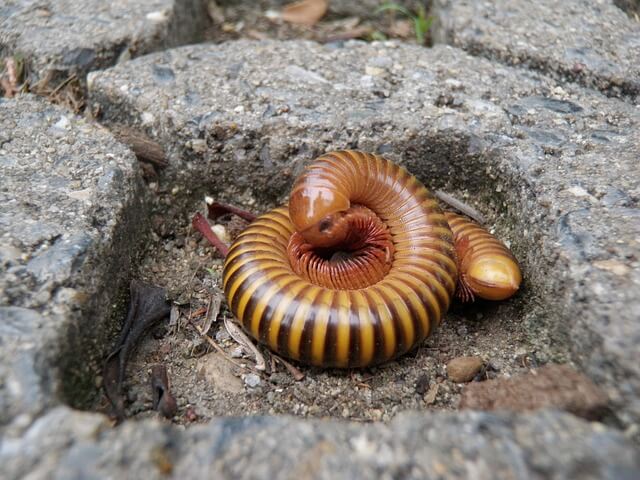 Here’s a prediction: we’re going to have millipedes to deal with again. What I have seen are millipedes so thick on a wall that you couldn’t put two fingers together on the wall without touching a millipede.

Folks who have lived here for a while know this critter, also known as “thousand legs.” They don’t really have 1,000 legs. I’ve never counted, but I’m betting less than 100. They do have 2 pair of legs per body segment, which distinguishes them from centipedes with only 1 pair of legs per segment.

Millipedes may live for several years but often go unnoticed by humans due to their preference for dark, cool, moist locations that are rich in organic matter – such as compost piles, rotting logs, the soil under logs or rocks, or shrubbery / flower beds with excessive mulch.

The lifestyle of the rich and famous millipede is to be reclusive and feed on decaying organic matter. They are decomposers partly responsible for compost, the rich humus on the forest floor, and the fact that all the leaves and limbs that fall every year are not still there year after year. Decomposers serve an important role.

When those conditions are right millipedes migrate and may end up (literally) in human habitations. Many humans find the condition intolerable. Actually the millipedes find it intolerable too. It seems to be more intolerable to them as they actually tend to die within hours of arriving in a human home – too dry and not enough to eat. But it’s the humans who act the most put out by dozens (or more!) millipedes in their homes day after day.

But none of that explains why there are years when millipedes are observed only in insignificant numbers. Why is it that for years they are seldom noticed and then they become a news item for a year or so?

One theory of population dynamics suggests that whenever any population, such as millipedes, becomes very numerous then some other factor is likely to cause that population to become less numerous. Those factors might include predator or parasite populations that increase with the increase in prey until they take them down.

Or perhaps the millipede population exceeds the carrying capacity of the environment – all the food is used up. I have never heard anyone identify predator or parasite that preys on millipedes, nor can I conceive that they run out of organic matter on which to feed. Perhaps some other factor is at work. At any rate the population grows slowly for a period of time and then crashes. Then it takes time for the population to build back to annoying levels.

In the past 25 years I have observed this cycle three times. I don’t remember exactly when the last one was, but I suspect we will soon see the problem recur. There have been enough reports this year to suggest that the population is doing well at least in some areas. When the numbers in migration become sufficiently large, it’s near impossible to keep them outdoors. They find minute openings around doors and windows or around entry points for utilities. Sliding glass doors seem especially vulnerable and difficult to seal. Since millipedes usually die in the indoor environment, pesticide applications are of little value. The millipedes just die closer to the point of entry, but you still have to clean them up.

So, for those who are completely creeped out when a creepy crawly living thing enters your living space, I predict that many of you will have not one but dozens, scores, or hundreds if not sooner, then later.  And it may go on for weeks or months. If you are in that group of humans, soon might be a good time to work on caulking and sealing around all your doors and windows and any other tiny opening through which a wandering millipede might crawl. Repair or replace weather stripping. Or you could plan a long vacation.

Forewarned is forearmed. To learn more about millipedes, visit https://content.ces.ncsu.edu/controlling-millipedes-in-and-around-homes.