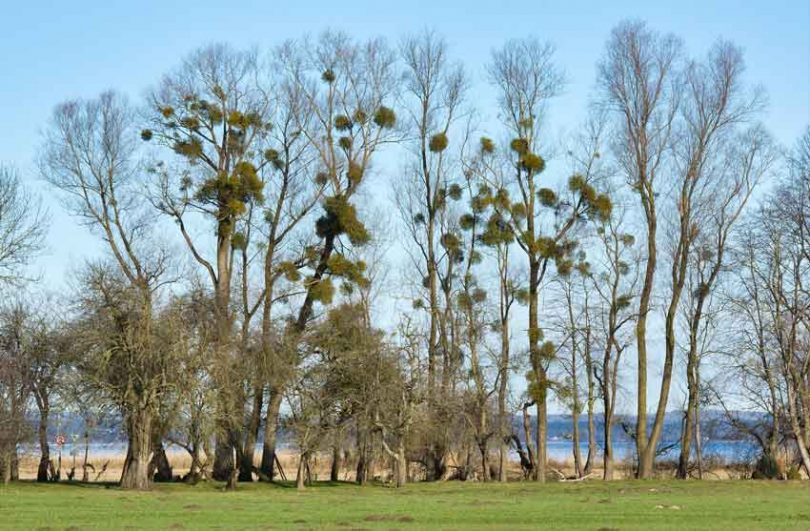 Did you know that mistletoe is a thief and a rogue? While most plant disease agents are microscopic (think bacteria, fungi, viruses), there are a few parasitic plants that can also cause symptoms and even death to other flowering plants. Most of these are not commercially significant, though witchweed and broomrape are two that can cause serious agricultural losses.

Then there are the mistletoes. There are actually two types, the dwarf mistletoe, which infects conifers, and the true or leafy mistletoe, which we will focus on here. True mistletoes are found worldwide and infect hardwood forest and shade trees as well as fruit trees among others. 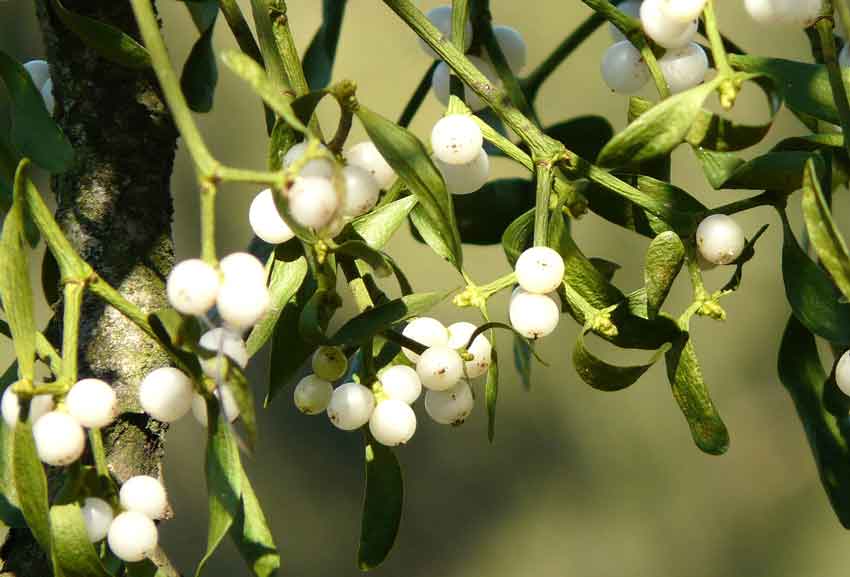 The U.S. and European mistletoes are cousins with a similar appearance including oval leaves and small white or sometimes red berries. The U.S. type has shorter, broader leaves and larger clusters of berries. The European species has also made its way to California.

Male and female flowers are on separate plants. The female berries are spread to new trees by birds. Seeds also spread within a tree. Internal pressure in ripe fruit forces the seed to shoot out encased in a sticky substance that adheres to almost anything it lands on. After landing, the seed germinates putting out a growth tube that flattens and produces a root-like protrusion called a haustorium. The haustorium penetrates the bark and puts out long strands that reach into the vascular system of the plant. It then steals the nutrients that are moving through the vascular phloem, absorbing them for itself, while starving the tree branch and literally sapping its strength and vitality. Other symptoms such as abnormal growth and deformity of tree branches are caused by the disruption of hormonal balance in the tree.

The mistletoe eventually produces new shoots and continues to grow in and on its host until it is mature enough to produce flowers of its own at 4 to 6 years old. True mistletoes are evergreen, and while they are capable of some photosynthesis they are lazy and their growth relies on stealing from their hosts.

So how did this lazy thief and rogue become associated with kissing and holiday celebrations? Mistletoes had roles in many ancient religious rituals including Celtic Druids and early Scandinavians. Pre-Christian cultures thought the white seeds indicated male fertility and called them oak sperm (but don’t eat them–they’re poisonous). The Romans used mistletoe in their Saturnalia festivals honoring the god Saturn. They associated the plant with peace, love, and protection and started the tradition of hanging it in the doorway. Perhaps this led to the tradition of kissing under the mistletoe.

The fact that the mistletoe is evergreen in the middle of winter seemed magical to the ancients. Add to that that these plants grow without roots in the ground and are paired with the mighty oak, king of trees, and you can see why ancient peoples thought mistletoe must be a divine gift imbued with magical powers. On reflection, perhaps I have judged mistletoe too harshly. After all, this so-called tree thief does offer something in trade for what it takes: peace, love, and perhaps a little of what you might call holiday magic.

Cynthia Sollod has always loved plants, hence a B.S. in botany and a PhD in Plant Pathology. She has volunteered with the Wake County Master Gardener program since 1995. She enjoys painting, illustrating plants, and writing about gardening.