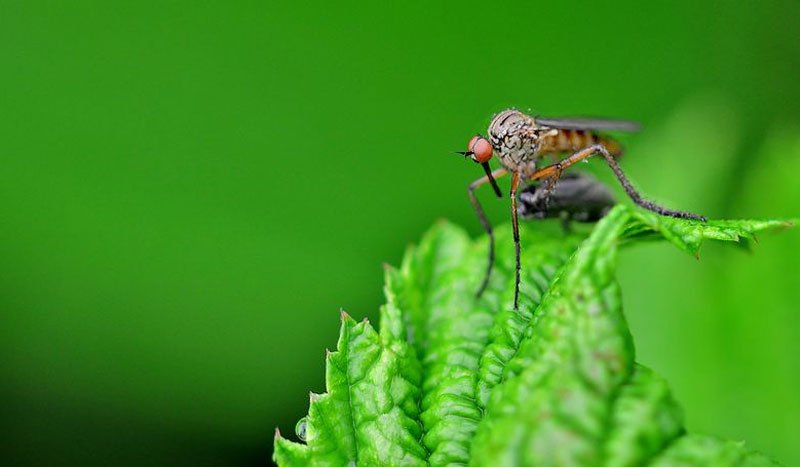 Are you ready for swatting? Me neither. In the Triangle area of North Carolina, where we garden year-round, anticipating mosquito season is not one of our favorite times of the year. But why should we have to wait to be mosquito-free? What can we do? Is there truly such a thing as mosquito control without chemicals?

If you ask the mosquito control companies, they’ll tell you they have the answer. Indeed, their chemicals control mosquitoes, but then fail to tell you their organic chemicals also kill everything else in the spray path.

Mosquitoes are more than a nuisance; they can be deadly. If a female is carrying a disease and she goes for your blood, you could be in trouble. Mosquito-borne diseases in the U.S. are some of the deadliest in the world because of the many diseases they transmit. We have had reported cases of dengue, Zika virus, West Nile virus, and Eastern and Western equine encephalitis, as well as a host of other diseases affecting you and your pets.

Thanks to the 2016 Zika outbreak, broad-spray mosquito control companies have grown exponentially, and have set homeowners into panic mode. Trust me, I don’t like mosquitoes either, and I’d rather die of old age with a hand-cultivator in my grip than from the mosquito-borne Zika virus.

When I posed a question to an area mosquito company about their chemical toxicity, their reply was, “Our chemicals are organic, and with such a low concentration, it doesn’t affect anything else.” Maybe I just look like I was born yesterday. When are we going to learn organic pesticides are still pesticides?

What About Our Safety?

Do we know enough about the chemical safety of these mosquito control solutions? To find out more, I reached out to Dr. Michael Reiskind, associate professor of entomology (the study of insects) at NC State University. Reiskind explains, “Mosquito control companies spray an insecticide — almost always a pyrethroid — to vegetation outside your house. That vegetation is where mosquitoes like to rest, so it kills them when they go in there. But it will kill other insects that also go in there to rest. We call that a non-target effect.”

These mosquito spray companies often minimize the risk of environmental impacts by statements saying, “The insecticides are similar to naturally-occurring substances found in chrysanthemums.” But the synthetic pyrethroids used to control mosquitoes have been manufactured to be more toxic and to last longer in the environment. It’s essential to understand all of the consequences of these chemicals.

Generally, barrier spray treatments are in areas where mosquitoes spend the daytime — under leaves and in shady areas. Conscientious appliers avoid spraying flowering plants, and by law, they should. But butterfly and moth caterpillars, and many other insects, eat the foliage of sprayed plants. Pyrethroids do not directly harm birds, but birds eat caterpillars, so they are at risk as well.

These mosquito control companies also claim they have certified applicants and only spray in the shrubs and trees, never on blooms, and before 10 am, before pollinators are foraging. To find out more, I also contacted Sydney L. Ross, with the NC Department of Ag and Consumer Services, Structural Pest Control & Pesticides Division, to ask how many applicators can operate under a single license?

Her reply was troubling, stating, “Within North Carolina, we allow for one licensed pesticide applicator to supervise as many individuals as he or she would like as long as all individuals work out of the same storage location.”

So only one person in an office with 5, 10, 20 pesticide applicators needs to be certified; only one applicator needs to go through the arduous certification training, and is annually re-certified? That licensee is responsible for any mistakes made by the person they are supervising. Please note, there is no requirement to verify in-house training.

Around my neighborhood, I’ve seen, and others have reported mosquito control companies spraying after 10am. So, while Ross was only a question away, I asked: How strictly regulated are the mosquito spray companies here?

Ross replied: “All mosquito spray companies are required to hold a public health category license with the Pesticides Section. Alternatively, some hold structural pest control licenses with our other section Structural Pest Control, which covers their mosquito applications around a structure. All mosquito application companies are subject to random and routine inspections once a year, and they are also subject to random inspections while in the field.”

Inspections generally cover topics such as personal protective equipment, products used, application method and equipment, record-keeping, pesticide storage, and environmental conditions during the time of application in regards to the licensee inspections. Inspections can also lead to an investigation if there is pesticide misuse. They investigate and follow up on all complaints received in their office regarding mosquito applicators, so if you see spraying after 10 am, call your local authority. Here, that number in Raleigh is (919) 218-7952.

The chemicals should likewise never be sprayed on or close to edible plants, including fruit-bearing trees, and vegetable and herb gardens. Structures like houses and swing sets also should be avoided; however, rules are murky about structures such as fences.

Pyrethroid insecticides used to kill mosquitoes will kill any insect that encounters it, including bees, caterpillars, and butterflies. But the reality is, there’s no way to entirely avoid hurting pollinators if you’re spraying for mosquitoes. More studies are needed to quantify this damage, but from experience, I am a twice-failed beekeeper. The first time I failed, I assumed it was Colony Collapse disorder. The second time, my bees were throughout the garden. I later found out one of my neighbors used a spray service. Other beekeepers have lamented to me the same experiences.

I have since registered to Fieldwatch (fieldwatch.com), a program that allows pesticide applicators to locate any nearby beehives or sensitive sites and contact the site owner to avoid pesticide contamination and drift. Although personal gardens are not yet allowed to register, I registered because I have over 30 fruit trees and consider my pollinator garden a sensitive site.

Mosquito spraying is not the only reason insects such as fireflies, butterflies, and bees are in trouble. But mosquito sprays can kill these species. Decreasing the amount of spraying is one thing we can do to help them.

Clean Up Your Garden

You diligently work to control mosquito breeding through Integrated Pest Management, right? The most important thing you can do to reduce mosquitoes in your yard is to take away their habitat through a tip and toss practice of ridding an environment of their breeding ground, which is standing water. In controlling a pest, you do the least environmentally impactful things first, then progress to the point of using chemicals, or not. I don’t use them.

Reduce the number of sites available to females for egg-laying — clogged gutters, old tires, plant holders, birdbaths, and discarded containers. Use repellents that keep mosquitoes at bay. And when the mosquitoes get too bad, go inside.

However, what your neighbor is doing may be overshadowing your efforts due to the mosquito control applications from a neighbor. Is keeping your yard clear of standing water enough? You need to get your neighbors on board. Mosquitoes are a neighborhood-scale problem.

Eliminating standing water isn’t always feasible, such as a pond. Bee Better Naturally recommends all-natural larvicide, which kills the mosquito larvae, but truly doesn’t harm other wildlife. These Bt dunks can wipe out another chunk of a garden’s mosquito population.

On our back porch, where we often sit, we have a series of ceiling fans and another oscillating, which helps a lot. But still not enough on days after a good rain. So I wondered what would Doug do?

At a recent conference, I asked Doug Tallamy, Professor of Entomology at the University of Delaware, what is his best recommendation for mosquito control. “Simple,” he said. “In an out-of-the-way area, fill a bucket of water, add wheat straw or hay, let it ferment. The fermentation attracts female mosquitoes to lay their eggs. Then add mosquito control dunks that are specific to the mosquito larvae.” I tried it, and it works.

We all have lots of decisions to make as consumers. For some people, a mosquito-free yard is worth the cost of some “by-kill.” But we should decide to spray our yard informed of the potential losses, as well as benefits.