If you are like me, you are filled with the excitement of what spring means for your landscape. A return to the growing season has us making lists of what has to be done for our plants to have an optimum growing environment. Often found at the top of the list is a hearty application of mulch. Benefits of mulch vary depending on the type of mulch — organic or inorganic — and how it is applied. 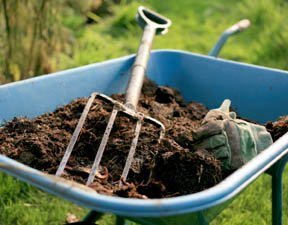 Organic Mulch
Organic mulch is the most common mulch purchased and has more overall benefit for the entire landscape. Hardwood bark and pine bark mulch have been around for several decades. Hardwood bark normally has a stringy consistency making it great for slopes and areas that are prone to erosion. Pine bark holds its color much longer, and is better for your plants, but will tend to wash away in heavy downpours. Leaf mulch also has great nutrient content as does compost.

Since the beginning of the 2000’s colored or “designer” mulch has gained in popularity. It first began as a trend with the dyed red mulch seen at your local Taco Bell or KFC. Now many homeowners are enjoying the color longevity in dyed brown and black mulch, while still benefiting from the breakdown of nutrients from the organic product. It is important to note that the EPA has approved colorants used in mulch today. A few include a fungicide to prevent yellow slime mold and artillery fungus, which can be a problem in hardwood bark.

A cheaper, natural mulch made from ground trees and stumps left over from construction development and tree removal works well for walking paths and natural areas.

Inorganic Mulch
The most popular inorganic mulches are typically decorative rock such as river rock or lava rock, which can come in a variety of colors. Brick chips and rubber mulch are inorganic products derived from the recycling industry. Inorganic mulch is generally very expensive compared to organic mulch, but since it does not deteriorate over time it can result in a cheaper overall cost compared to adding organic mulch each year.

Application Steps
1. Rake and remove old mulch and leaves. This will also help to remove insect eggs, fungal spores and soil-disease organisms.
2. Saturate the area where mulch is being applied. Thoroughly water the areas where perennials are located.
3. Place mulch in piles around the garden bed.
4. Rake the mulch evenly leaving it 2-3 inches thick (1-3 inches for perennials). Ensure mulch is not applied within 3-4 inches of shrub stems and tree trunks or within 1 inch of perennial stems.

Mulch can be purchased in bags at garden centers, in bulk at landscape supply stores, or installed by a blower truck which is more expensive, but provides an even application and saves material, time and labor.

Benefits of Mulching
The biggest benefit is mulch’s ability to retain moisture and decrease water use by up to 25%, which also keeps plant roots cool as temperatures soar. Organic mulch breaks down into rich humus as it decays, creating a nutrient rich garden. Mulch also provides erosion control by adhering to itself and preventing rain from washing it away. This thick layer of organic matter also provides weed suppression.  Lastly, mulch is aesthetically pleasing in the garden and creates great curb appeal.

Byline:
Brent Booker, also known as the “Indiana Jones of Mulching”, is the proud father of two blower trucks and crews in Raleigh (and the proud owner of two beautiful children). He can be contacted at brent@atlanticmulchanderosion.com.