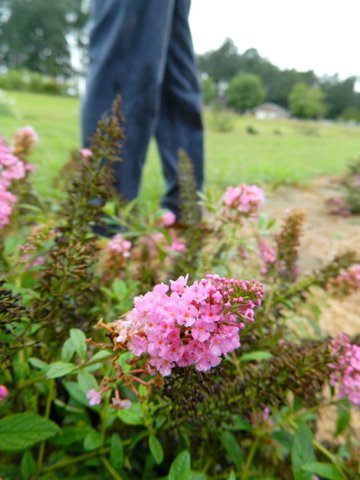 The weather had been less than ideal for my trip with Dr. Dennis Werner, the J.C. Raulston Distinguished Professor of Horticultural Science and plant breeder at N.C. State. There was a chill to the dreary drizzle, but it could hardly deter my excitement. After having Dr. Werner for both my Plant Propagation and Gardening with Herbaceous Perennials classes, I was finally getting to see the plants and places I’d only seen in pictures. 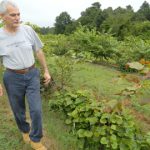 Most gardeners might not know, but they’ve seen Dr. Werner’s work in their local garden centers. His most recent claims to fame are the recently released purple-leafed, weeping Cercis canadensis ‘Ruby Falls’ (Redbud) and the new Chip series of dwarf, sterile Buddlejas (Butterfly bush). I was about to walk into the test plots of a breeding giant.

Dr. Werner didn’t hesitate to direct the large, old van over the fields of the N.C. State-NCDA Sandhills Research Station near Pinehurst, NC, stopping by the closest stand of Cercis. He explained the reasoning for this small stand alone section. These are the F1 offspring, or the first generation of plants from a cross, so Dr. Werner is hoping they will interbreed among themselves and then the desirable traits would come out in the F2, the second generation. Only in their first year in the field, they have another two years to go before they flower and produce pods.

While it seems simple enough, there is a certain amount of luck with this isolation technique. The traits have to be simple Mendelian (think back to learning about Mendel’s peas!), either dominant or recessive. Pollinators and the wind also add the extra threat of cross-pollination, but for the most part it works. As we moved through the research station, I also got the sense Dr. Werner was just a lucky man in general.

I noticed the Cercis plots were planted in full sun, unprotected by very little around them. “Cercis are promoted as a fringe tree, but they do fine in full sun,” Dr. Werner said.

‘Ace of Hearts’ is probably my favorite, along with ‘Floating Cloud,’ because of the dense, dark, defined heart-shaped leaves. There is an excellent specimen in the Southhall Garden at the JC Raulston Arboretum.

The next plot we came to was full of offspring from a ‘Ruby Falls’ x ‘Ace of Hearts’ cross. The diversity of plants before me was astounding. It was like looking at brothers and sisters next to each other, you can see in them characteristics of their parents. It made me realize how much we take genetic diversity for granted, and how rare it is to see it so clearly illustrated. 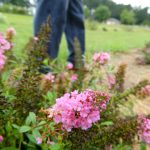 Not far away are the test plots for Dr. Werner’s Buddleja breeding. “This is sort of the culmination of 15 years of butterfly bush breeding,” Dr. Werner announced. His released varieties, commercial varieties and some seedling selections were growing together to see how fast they grew compared to each other, as well as whether his varieties maintained their sterility, even in the presence of other varieties. Sterility is important for butterfly bush in the horticultural trade because of its tendency to become invasive in some areas. Oregon had an import ban on them until Dr. Werner released sterile varieties.

We walked the rows, admiring the form, foliage and flower color. Dr. Werner told stories about the varieties and what he was thinking when he developed or chose them. Among all his work, I had to know why he chose Buddleja. I learned plant breeders see time very differently.

“When I started breeding ornamentals in the late 90’s, I wanted to choose a couple different species to work on, but I wanted to make sure one was rather fast, in terms of generation time, so that I could make progress really quickly, and maybe have some results in six or seven years,” he said.

When he entered the Buddleja breeding field, Dr. Werner and his technician saw ways to improve the variety of dwarfs (at the time there was only one called ‘White Ball’), as well as sterility. 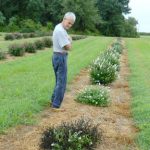 “Good ol’ Blue Chip. This is what started it all,” he reflected. “This plant opened up so much opportunity. It’s been a great parent. All my other dwarf selections trace back to Blue Chip.” Blue Chip came out of a cross, but it was a fourth-generation cross originally intended for yellow flower color. “Interspecific hybridization and a little bit of luck,” he chuckled.

Dr. Werner is also working on something beyond developing new ornamental varieties. He showed me a row of Cercis canadensis, but their leaves were smaller, more heart-like and much denser. The plants, he explained, are from seed from the southern-most population of trees outside of Tampa, Florida. He was using them to breed heat-tolerance into commercial varieties. Most Cercis do not grow well in the deep South and he hopes the progeny of his crosses will grow better.

Our last stop was at the farthest reaches of the station. We bumped along the ruts and came upon older plots of maturing trees and bushes. Even as the rain came down, Dr. Werner rolled his window down for one last treat: the original ‘Ruby Falls’.

While we walked and worked, we talked of everything, from teaching, to society, to the bright green stink bugs that climbed down the branches. Although the rain eventually made us stop, Wendell Berry, a favorite poet of Dr. Werner’s, has the perfect words for the day in his book “Jayber Crow.”

“We walked always in beauty, it seemed to me. We walked and looked about, or stood and looked. Sometimes, less often, we would sit down. We did not often speak. The place spoke for us and was a kind of speech. We spoke to each other in the things we saw.”

Amanda Wilkins is a graduate of horticultural science from N.C. State. Please feel free to email her at [email protected]