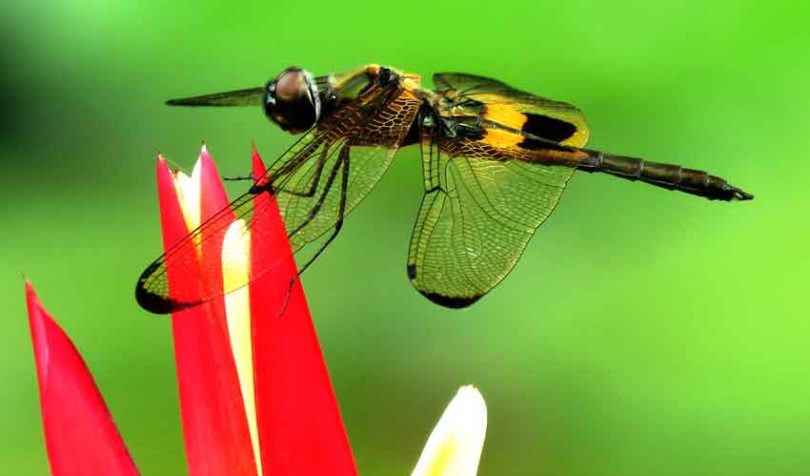 With all the rain we have had over the past few years, there has been no shortage of dragon and damselflies. That makes me very happy! As one of nature’s most intriguing and fascinating insects, you’ll want these critters in your garden for many reasons. Read on to learn how to attract and keep dragonflies and damselflies coming to your garden.

Did you know, the U.S. is one of the few countries that differentiates the sexes of dragon and damsel?

Dragons are widely spread and commonly occur on every continent, except Antarctica. Dragonflies may look fragile; they aren’t. Instead, they’re considered as a voracious predator. Research reveals they are one of the most effective, brutal hunters in the whole animal kingdom. Dragons of any species or genus are aggressive predators, both in the adult form as well as in the larval stage, at which they’re referred to as naiads or nymphs.

As you spend time near freshwater this summer, here are a few helpful tips for telling these insects apart.

What is a Dragonfly?
Attractive characteristics of dragonflies are the large multifaceted eyes, an elongated body, and four transparent and strong wings with colored markings. And if the wings are out like an airplane, it’s a dragonfly. Dragonflies tend to be larger and have different shaped wings.

What is a Damselfly?
Damselflies are often misunderstood as dragonflies, which have a similar structure, but damselflies have a slightly smaller build. The eyes of a damselfly are round and protrude on either side of the head, whereas the dragonfly has eyes that lie flat on the head. If the wings are pinched together and held upright, it’s a damselfly. Damselflies are smaller in shape and their wings (forewings and hindwings) are close to the same shape.

Dragon and damselflies see with 30,000 eyes to find food and mates. These agile flyers have a beautiful metallic or iridescent color produced by the coloration of the structure, evolving them as a conspicuous insect during flight.

Habitat
The damselfly larvae are aquatic in nature, and they are found under the water in rivers, streams, lakes, ponds, and wetlands. They mostly prefer the areas where the water is still or slowly moving. They stick to the bottom parts of wood or rock submerged in the water.

Lifecycle of the Dragonfly
In a single clutch of adult dragons, around 1500 eggs are produced, which takes seven days to hatch and evolve as an aquatic nymph.

A dragon larva evolves from hatched eggs. A dragon spends most of its life in the larvae stage, which is rarely seen because, at this stage, they live underwater in some ponds and lakes.

In a dragon’s life, many years are spent as a larva in a freshwater habitat. The adult form in the flying stage lasts for only a few weeks or days. They are renowned as agile and fast fliers that migrate across the sea and oceans, but their actual habitat is away from the water body.

When larva gets ready to transform into an adult dragonfly by the process of metamorphosis, it stops eating, and emerges from the water to the surface, mainly at night.

Gradually its respiratory organs start to breathe air, and its head alone stands out of the water. Later, it climbs on some emergent plant or reeds and starts to molt. Then it anchors itself vertically with the help of its claw, and slowly its skin behind the head begins to split. Thus, the larvae stage comes to an end, and the adult dragonfly emerges out of this larval skin.

What Do Dragonflies Eat?
As adults, dragonflies eat just about anything they can catch on the wing—meaning while they fly in the air. Favorites include mosquitoes, gnats, flies, flying ants, swarming termites, mayflies, midges, butterflies, damselflies, other dragonflies, or just about anything small enough for them to catch. They are ruthless, and we need buggy gardens to attract them. And let’s hope your garden is buggy, so there is plenty of food for these insects to feed on as well as birds and butterflies.

As nymphs, they feed on tadpoles, small fish, and mosquito larvae with its toothed mouthpart known as labium. They respire through the gills present in the rectum. In this stage, the larva molts around 6 to 15 times.

Where Did the Name ‘dragonfly’ Originate?
Although no definitive answer exists, one exciting theory about its origin was found in a 1958 folklore book entitled Folklore of the Dragonfly: A Linguistic Approach. Eden Emanuel Sarot theorized the name dragonfly actually came about because of an ancient Romanian Folktale. In the folktale, the Devil turned a beautiful horse ridden by St. George (of St. George and the dragon fame) into a giant, flying insect. The Romanian names the people supposedly refer to this giant insect as ‘St. George’s Horse’ or, more commonly, ‘Devil’s Horse.’ According to Sarot, the peasantry of that time viewed the Devil’s Horse as a giant fly and that they may have started referring to it as the ‘Devil’s Fly’ (instead of Devil’s Horse). Sarot stated the Romanian word for Devil was “drac,” but that drac was also the Romanian word for dragon