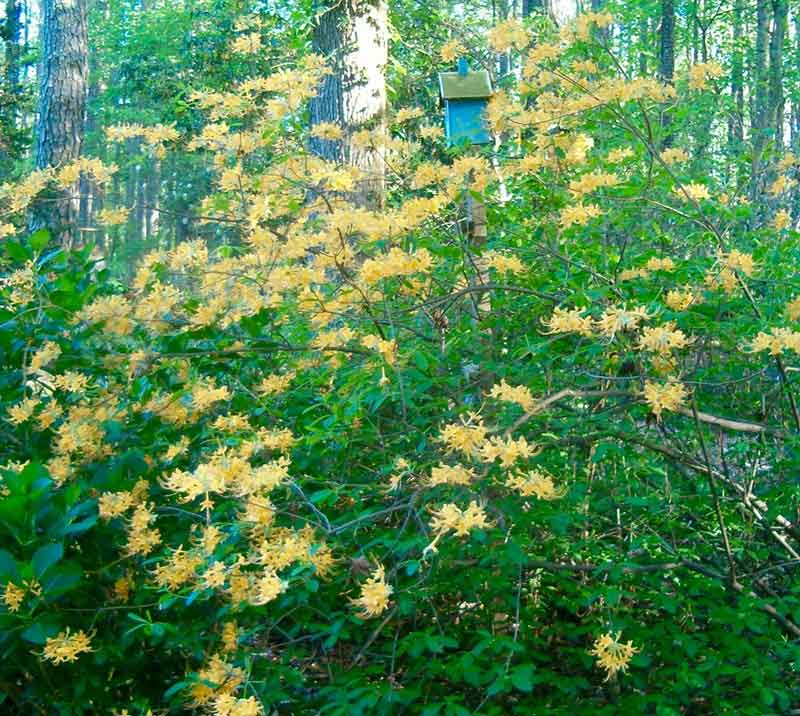 Gardeners can be prone to obsessions. I knew my husband was entranced, if not obsessed, when he came home 21 years ago with seven different species of native azaleas for our garden. The azaleas were critical for John’s over-riding goal of having something in flower 365 days a year. Year-round bloom is achievable though not easy in our climate, and it was particularly challenging in our heavily wooded, shady garden.

Unlike the Asian azaleas commonly seen in Triangle gardens, native azaleas are not evergreen. They lose their leaves in winter, after providing excellent fall color. The earliest species to flower bloom on bare wood before their leaves emerge. While some native azaleas are low, spreading shrubs, others, including the Piedmont and Plumleaf, can grow 12 to 20 feet tall and have the presence of small trees. 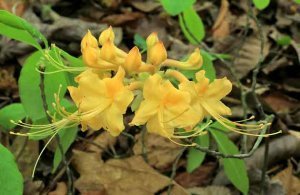 John had selected Florida and Piedmont azaleas for bloom in early spring, followed by Pink-Shell and Sweet in May, Swamp and Plumleaf for summer, and Hammock Sweet for September. Planted in a semi-circle in an area opened up by Hurricane Fran, the azaleas delivered the promised succession of flowers.

Enchanted by the Florida azalea’s yellow-orange flowers, and the Sweet azalea’s fragrance, I soon shared John’s fascination and started seeking out other native azaleas for our garden. There were many to choose from. 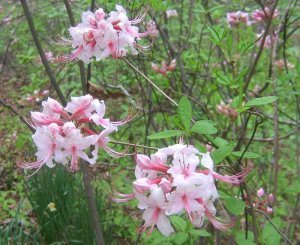 The Southeast is home to nearly all of the approximately 20 species of deciduous azaleas native to North America. Most have exquisite flowers. Many white- and pink-flowered azaleas are known for their fragrance, which varies from lightly sweet to spicy depending on the species. Among the yellow-orange forms, only the Florida azalea is fragrant. You can download an extensive chart of native azaleas perfect for Triangle gardens here.

Some native azalea species are widely distributed across the region while others are found in only one or two counties. Piedmont azaleas occur in every Southern state from North Carolina to Texas while Plumleaf, the signature plant of Calloway Gardens, is found in only a few counties along the Georgia-Alabama border. Both make excellent garden plants. 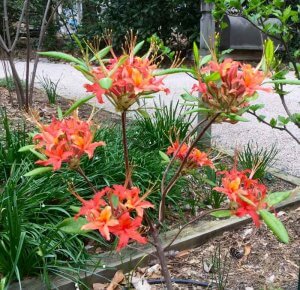 New native azalea species continue to be identified including the Red Hills azalea (R. colemanii), discovered in a few Alabama counties in 2008. Adding to native azaleas’ diversity is their tendency to hybridize with other species in the wild. Taking advantage of the ease with which native azaleas can be cross-pollinated and grown from seed, gardeners and nurserymen have introduced many cultivars. Among these is Rhododendron x ‘Snowbird’ a cross between Piedmont and Coastal azaleas discovered at Biltmore Gardens in Asheville.

As often happens with passionate infatuations, we began our relationship with native azaleas stunned by the plants’ beauty but knowing far too little about their habits and needs. John’s Pink-Shell azalea (R. vaseyi) soon died out in our dry Piedmont garden. Later on we discovered Pink-Shell occurs naturally only at high elevations in the mountains of North Carolina. Fortunately, there are almost a dozen native azalea species that thrive in Triangle gardens when sited correctly.

Like other Rhododendrons, native azaleas prefer acidic soil (pH 4.5 – 6.5) and good drainage. Most are drought-tolerant once established, but it’s important to keep their roots from drying out for the first two years. We learned this lesson after planting a group of Piedmont azaleas in six hours of direct sun. It’s important not to overwater azaleas, so a layer of leaf litter or mulch will help the roots retain moisture.

Native azaleas are shallow-rooted, so it’s best to avoid using herbicides near their root zones, and they may require protection in gardens where voles are a problem. Unfortunately, deer enjoy browsing native azaleas just as much as they like their Asian cousins. 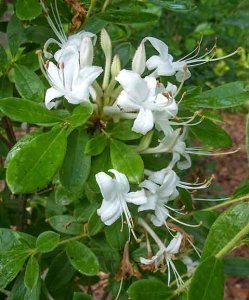 Most native azaleas can tolerate light shade. A Flame azalea planted in dappled shade in our front yard has been a stalwart for 19 years, developing a beautiful form and flowering reliably. However, all native azaleas grow and flower best with some direct, preferably morning, sun.

Over the decades since Hurricane Fran, the tree canopy around our original azalea planting has grown taller and denser. As a result we’ve witnessed that too much shade distorts the growth of native azaleas and weakens the plants. Our only options are to call in the arborists for some pruning and removals or to recreate the planting in another area. After all these years, our original infatuation with native azaleas has grown into an abiding love. Living without these beauties in the woodland garden is not a choice that either of us could make.

– The website for the Azalea Society of America provides detailed information about native azaleas’ habits and culture. azaleas.org.

– The Southern Highlands Reserve, an arboretum and native plant research center in Lake Toxaway, NC, showcases the diversity of Gregory Bald hybrids along its Azalea Walk.

– Two books that include native azaleas are Best Native Plants for Southern Gardens by Gil Nelson and Native Plants of the Southeast by Larry Mellichamp.