Every garden needs a few stars—masses of colorful bulbs for spring, a stunning hydrangea show in June or a fabulous display of dahlias in the fall.

Some of these plant stars, like their Hollywood counterparts, can be fussy and demanding. The most rewarding gardens also feature a strong supporting cast of reliable, non-demanding plants to carry them through the year. 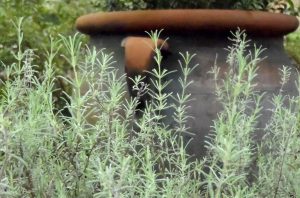 My nominees for most overlooked plants in this supporting role are the shrub mints, also known as calamints or savories, native to the Southeastern United States. These compact, evergreen or semi-evergreen shrubs are drought tolerant and resistant to deer and other browsers. They feature aromatic foliage and tubular flowers typical for the mint family.

Flowering season varies among the shrub mints from very early spring to fall, but all varieties bloom for an extended period. While not large or showy, the flowers are attractive, and they are excellent sources of nectar. Surprisingly, they remain neither widely known nor grown here in the Triangle.

I first became acquainted and enchanted with savories on fall trips to the Alabama Gulf Coast with my husband’s family. Scattered throughout my mother-in-law’s woods, and it seemed on every roadside in Baldwin County, was a cheery 18-inch tall shrub covered with bright red tubular flowers. The locals referred to the plant as “wild basil,” but no one seemed to use it for cooking.

With the help of a native mail order nursery, I learned that wild basil, also known as red basil and scarlet calamint, occurs naturally in dry sandy areas from Georgia to Mississippi. While hardy enough for the Triangle given good drainage, red basil needed more sun than my then shady garden could provide. Fortunately, I found the plant’s close cousin, Georgia savory (Clinopodium georgianum), being sold by a vendor at the State Farmer’s Market in Raleigh. 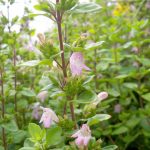 Georgia savory is more widely distributed across the Southeast than its wild basil cousins, and unlike them, readily adapts to clay soil. As part of my un-irrigated mailbox planting, Georgia savory withstands deer, drought, overthrown newspapers and the neighborhood dogs. An annual shearing after the bloom keeps my plant tidy. After seven years, it remains under two feet tall, but approaches three feet in width.

Wild rosemary (Conradina canescens), another Southeastern shrub mint, has fine-textured gray foliage, but unlike Mediterranean rosemary thrives in our humid summers. It needs good drainage, but requires nothing else even in the driest, poorest, and most acidic soils. Native plant expert and author Bill Cullina describes Wild rosemary saying, “Overall they are undemanding, problem-free plants that will reward you with lovely flowers and neat foliage.”

In my garden, wild rosemary was the answer for an impossibly arid spot along the driveway. The delicate shrub produces a haze of pink flowers, this year from late winter through spring. Cutting back the spent bloom is all that’s needed to maintain wild rosemary. It could even help with the weeding. Like some other plant species, wild rosemary produces chemicals known as monoterpenes that suppress the germination of grasses and other weeds in the surrounding soil.

Although their Pacific Coast counterpart, Yerba Buena (Clinopodium douglasii), was considered a cure-all, there’s little evidence of Southeastern shrub mints being used medicinally. Gardeners who are fans of reliable, non-fussy plants may, however, find them addictive.

Where to Find: Shrub mints can be purchased at several local specialty nurseries and garden centers, the State Farmer’s Market and online.