Scientists at the UNC Herbarium of the North Carolina Botanical Garden in Chapel Hill have named a new species of wildflower.

The newly named Marshalli legrandii is an herbaceous perennial plant found in a limited area of the Piedmont of North Carolina and south-central Virginia. 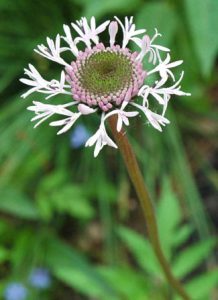 The plant had been collected by others in the 1960s, 70s, and early 80s, but was given a different name, Marshallia obovata. It wasn’t until North Carolina Natural Heritage Program biologist Dr. Harry E. LeGrand Jr. found what he considered to be unusual looking Marshallia plants near Butner, NC, that the possibility of a new species was considered.

North Carolina Botanical Garden staff propagated Marshallia legrandii plants from seed collected in the wild. These new plants are installed in the Piedmont Habitat Garden at the botanical garden.