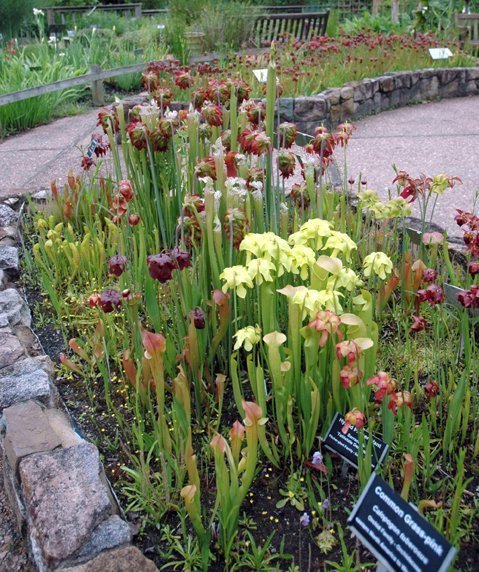 Fifty years ago, on April 10, 1966, the North Carolina Botanical Garden opened its first garden to the public, the Piedmont Nature Trails. However, the vision for the garden started much earlier than these trails.

In the late 1920s William Chambers Coker, a professor at the University of North Carolina in Chapel Hill, and his student Henry Roland Totten proposed a botanical garden south of the main UNC campus. Although some plantings were made by the 1940s, it was in 1952 that the university Board of Trustees dedicated 70-forested acres for botanical garden development. William Lanier Hunt, a horticulturist and former student of Coker and Totten, added 103 acres of dramatic creek gorge and rhododendron bluffs to this tract. Hunt also helped to found the garden’s membership support organization, the Botanical Garden Foundation, in 1966. 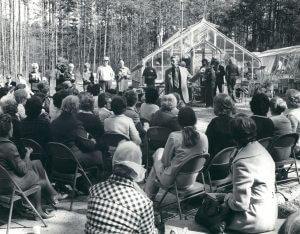 A gathering at the greenhouse / NC Botanical Garden

Throughout the garden’s history, conservation and native plants have been at the core of its work. In 1961, C. Ritchie Bell, a professor of botany and tireless promoter of the flora of North Carolina, was appointed the garden’s first director, and work to open a public site for the appreciation of North Carolina’s plants began in earnest.

As the garden grew beyond the nature trails, students, volunteers, and a growing staff constructed “habitat gardens,” displays representing the major plant communities of the state and illustrating the theme of botanist B. W. Wells’ book The Natural Gardens of North Carolina.

In addition to promoting native plants, the garden sought to help gardeners across the state understand the importance of conserving these plants. Encouraged by the North Carolina Wild Flower Preservation Society (now the North Carolina Native Plant Society), the garden promoted “Conservation Through Propagation,” advocating for native plants to be grown from seeds and cuttings, rather than collected from their natural habitats.

The garden also became a steward of natural areas in partnership with the Botanical Garden Foundation. They currently care for over 1,000 acres of land, including display gardens and nature preserves.

Through demonstration, forward-thinking policies, and its own conservation projects, the North Carolina Botanical Garden became known as a conservation garden, coining the term and setting an example for other public gardens across the country. 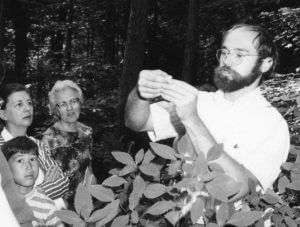 A class in the early 1970s / NC Botanical Garden

In addition to a focus on conservation, the garden has acquired responsibility for other major sites during the past 50 years: Coker Arboretum, a garden on the central campus of UNC-Chapel Hill; Mason Farm Biological Reserve, a tract of old farmland and ancient woodlands that provides wildlife habitat and research facilities for diverse projects; Battle Park and Forest Theatre, a natural area bordering the UNC-Chapel Hill campus; the University of North Carolina Herbarium, home to more than 800,000 plant specimens; and the Carolina Campus Community Garden, a vegetable garden that provides fresh vegetables to UNC-Chapel Hill housekeeping staff.

Today the North Carolina Botanical Garden is nationally known for its conservation practices, educational programs, and display gardens. The garden will celebrate its 50 years with a variety of events throughout 2016. Find out more at ncbg.unc.edu.