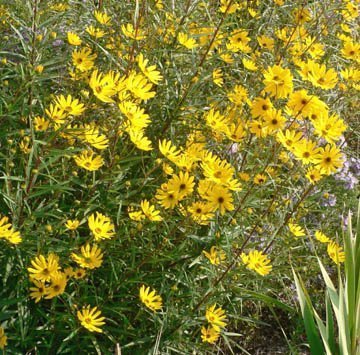 When most people think of sunflowers, they probably conjure up the annual plant with its dinner plate-sized flowers and somewhat ungainly appearance.  While this might look cute in a vegetable plot or children’s garden, it might not work in a typical flower bed.

Instead of planting this annual species, try one of the perennial varieties. They make up for their smaller flowers, only two to three inches in diameter, with sheer numbers, hundreds covering a single plant.

Swamp sunflower (Helianthus angustifolius), a common roadside wildflower in eastern North Carolina, can easily reach six to eight feet in height and will spread aggressively in a moist sunny location.

Luckily, several cultivars are more demure, although they may still produce offspring. ‘First Light’ is about four feet tall, admittedly still a good-sized perennial. If you want a truly shrunken sunflower, twelve-inch ‘Low Down’ should fit into any garden.

Willow-leaf sunflower (Helianthus salicifolius), is native to the alkaline prairies of the Midwest, but a plant in the JC Raulston Arboretum Perennial Border seems to be doing just fine. You could almost grow this sunflower for its foliage alone, with delicate narrow, linear leaves lining glaucous blue-gray stems.

Most sunflowers sport the typical bright yellow flowers, but ‘Lemon Queen’, a hybrid with Midwestern parents, has pale yellow flowers that may fit better into your garden’s color scheme. At 6-8 feet, it is decidedly not one of the shorter varieties.

Many varieties of sunflower are happiest in fairly moist soils, but also do fine in average conditions and are pretty drought tolerant once established. Many will reseed in your garden, but the small plants are easy to pull up. Deadheading the flowers would take care of this problem, but it’s time-consuming and robs the birds of a food source.

The considerable height of many sunflowers can lead to some problems. Stems can break off in high winds, and I even read where one gardener claimed that the weight of birds snapped them.

On my plant, the stems are upright until late summer, when they begin flopping over and start to put out vertical shoots.  If any of this bothers you, staking is one answer, or perhaps using some kind of cage. The easier solution is to cut the plants back to knee height in mid-June. You will end up with shorter, bushier plants that will bloom a couple of weeks later than normal.

Sunflowers are a great example of delayed gratification. Although you might become impatient staring at a huge, green perennial all summer, you’ll be amply rewarded when it explodes with yellow flowers in September and October.

Byline:
Charlie Kidder gardens in Cary, where he tries to cram every plant possible into his half acre. He also helps to care for the xeric gardens at the JC Raulston Arboretum.  He can be contacted at [email protected]