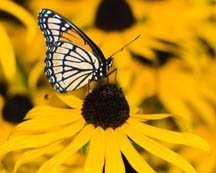 Rudbeckia hirta – Black-Eyed Susan. Rudbeckia is flowering plant commonly known as coneflowers. Close flowering relatives are Echinacea, Dracopis and Ratibida. They are herbaceous, mostly perennial plants. The flowers are produced in daisy-like inflorescences, with yellow or orange florets arranged in a prominent, cone-shaped head. They are popular garden flowers, distinguished for their long flowering times. There are many cultivars of these species. The name was given in honor of Uppsala University botanists professors Olof Rudbeck (father and son). The plant is also a popular garden ornamental. Image is captured in 12 bit RAW and processed in Adobe RGB color space.