In 1982, the term “biodiversity” was not in use, but awareness of the need to conserve our native plant species was growing. Hoping to build that awareness, the North Carolina Botanical Garden in Chapel Hill, NC, launched an effort to promote the large-scale production of attractive wildflowers for use in gardens. 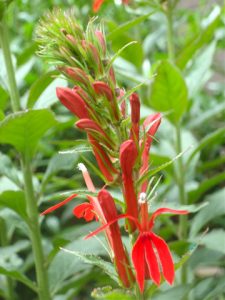 Ken Moore, retired assistant director of the Botanical Garden, recalls that impetus for the program arose because most wildflowers grown in gardens at the time were dug up from the wild. According to Moore, few nurseries were growing native plants. “Wildflowers were thought to be something magical and mystical, something you couldn’t propagate,” he says.

Stunned by the beauty of a Cardinal flower (Lobelia cardinalis) growing in a ditch, Moore collected some seed, sowed them in a flat, and was amazed when the seeds “came up like petunias.” That high germination rate helped Cardinal flower become the first North Carolina Wildflower of the Year (WFOY).

Each year since, with the help of the Garden Club of North Carolina, the Botanical Garden has promoted a wildflower by providing seed to gardeners and nurseries. Ease of cultivation is still a primary factor for selection. Seeds are distributed throughout the state so the chosen plant must be able to thrive in the mountains, piedmont, and coastal plain.

“It’s most important that people have success and get excited about growing native plants,” says Chris Liloia, a Botanical Garden curator who worked with the program for many years. 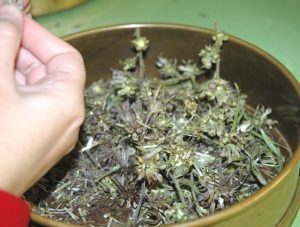 The WFOY must appeal to gardeners and be easy to grow, but perhaps the largest issue confronting the program is finding and processing sufficient quantities of seed. The seed program’s largely volunteer staff processes about 3,000 WFOY seed requests annually.

A thriving planting of hoary skullcap (Scutellaria incana var. punctata) near the Botanical Garden’s Education Center provided seed for this year’s distribution, but staff and volunteers keep constant watch for wild populations. Some have come from Orange County, including Atamasco lilies (Zephyranthes atamasca). A farmer gave staff permission to collect seed from an enormous stand of lilies growing in his pasture.

Candidates are identified one or two years in advance, but as gardeners know, flowering and seed production can be unpredictable. Dot Wilbur, who creates illustrations used on distribution brochures and T-shirts for the WFOY, recalls occasions when the final decision came too late to use live, blooming plants as models. Piedmont Barbara’s-buttons (Marshallia obovata var. obovata) was particularly challenging. Since it is rarely cultivated, Wilbur could locate few photographs. Lacking the data for a detailed illustration, she chose a quilt motif for that year’s illustration. 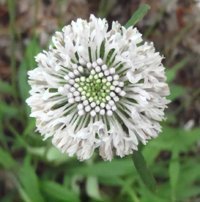 Piedmont Barbara’s-buttons and other recent selections are available only from seed distributions or specialty nurseries; however, most WFOYs can now be found at Triangle nurseries and garden centers. Some, including Black-eyed Susan (Rudbeckia fulgida) and butterfly weed (Asclepias tuberosa) have become garden staples due to the efforts of the Botanical Garden and other native plant advocates. As a gardener who has succeeded in growing 27 of the 31 wildflowers chosen to date, I eagerly await each year’s selection.

To view a list of all the Wildflowers of the Year, visit the Garden’s website at ncbg.unc.edu.