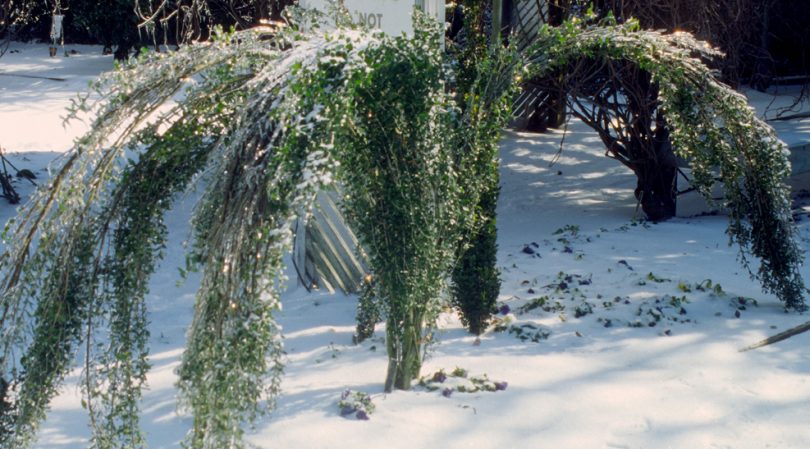 Although the coldest temperatures are during January and February, hardy plants have been gradually acclimating to declining temperatures since early fall.

Perennials, deciduous trees, and conifers have all developed different strategies for dealing with winter. These processes are essential in preparing against a deep freeze that could otherwise kill the plant. The danger comes from water freezing inside cells. If that happens, cells burst causing irreversible damage.

The transition to shorter days and colder temperatures are signals for plants to make physiological changes that will help them avoid cold injury. Shorter days, which are not optimal for photosynthesis, and freezing temperatures, which will limit the availability and movement of water, are triggers for many plants to slow down their processes and become dormant.

The oncoming cold and reduced light in autumn trigger root-hardy perennials and bulbs to move their summer buildup of reserves into the roots for the dormant phase. The above ground foliage dies, but their roots live on in the ground. The reserves will be called upon when spring arrives.

Deciduous trees, shrubs, and full hardy perennials have their own mechanisms for dormancy. The most noticeable change is leaf drop. Nutrients are first transported into the interior branches and roots. Leaves are then shed as a method to prevent water loss and dehydration.

Hardy plants must contend with the potential damage that ice crystals could do to cells. To prevent ice crystals from forming inside cells, plant membranes undergo changes that allow them to become more elastic. Water is then able to move outside the cell into the spaces between the cells. When this water surrounding the cell freezes it releases heat and acts as a mechanism to warm the cell’s interior. While ice outside a cell can be tolerated, ice crystals inside a cell would be fatal. To battle against this possibility, another metabolic shift converts stored starches into sugars. Sugars in cell sap act like antifreeze by lowering the freezing point so that cells won’t freeze even at temperatures below 32 degrees. Other cell changes include the buildup of fats and proteins that also lower the freezing point, and further elimination of water from the cell’s interior.

Evergreens have cellular changes similar to those of deciduous trees, but since they keep their leaves they must have additional protection. Thick waxy coatings help prevent the loss of water on hollies and other evergreens. Long thin needles on pines and other conifers also help conserve water. Conifers also have internal water transporting cells called tracheids that are adapted for the cold. Tracheids in conifers are much narrower in diameter than those in deciduous trees. When water freezes, any dissolved air comes out of solution and forms an air bubble that could potentially burst open the water transport column. But because the conifer vessels are so narrow, air bubble formation is limited to small bubbles that are easily reabsorbed.

While these mechanisms protect plants from below freezing temperatures, extreme cold of several hours below 25 degrees can cause damage. It’s at this point that you may wish to take steps to protect your plants.

How to Keep Plants Alive in Winter

It is important to hydrate and water plants before a deep freeze sets in. Wet soil can hold more heat than dry conditions and will aid in protecting roots and will help prevent desiccation. Adding a layer of mulch will insulate the soil and ensure that the moisture is locked in. Covering plants with a sheet or plastic at night can also provide some protection, just be sure to remove the covering during the day.

Don’t panic if there is visible injury. While some branch tips, early foliage or flower buds may be affected, most plants will survive. Once plants are actively growing in the spring you will better be able to assess whether permanent damage has occurred. New growth will be more susceptible to cold damage so avoid fertilizing until all danger of frost has passed.

Cynthia Sollod has always loved plants, hence a B.S. in botany and a PhD in Plant Pathology. She has volunteered with the Wake County Master Gardener program since 1995. She enjoys painting, illustrating plants and writing about gardening.