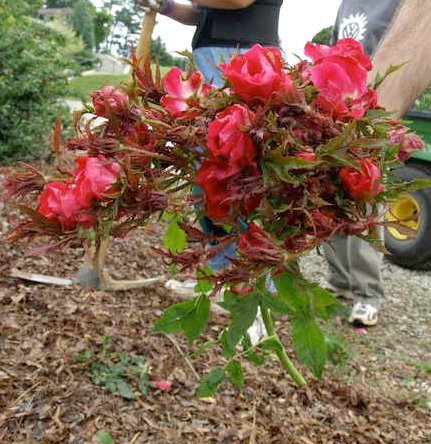 To the dread of North Carolinian rose lovers, rose rosette disease (RRD) has arrived in our state. First sighted in Manitoba, Canada, in 1941, RRD next appeared in Wyoming—and then it seemingly disappeared until 1957 when it popped up in Nebraska. Three years later it became a cause for concern for rosarians in that state.

The key ingredient in this story is Rosa multiflora, a noxious weed that Congress mandated should be planted during the dust bowl years in an effort to prevent soil erosion. In our state alone 15 million specimens were planted. One downside to planting R. multiflora—and there are many—is that it is extremely susceptible to rose rosette disease. 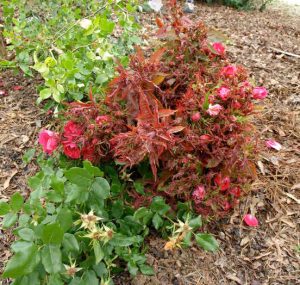 By 1978 rose rosette disease had spread to Kansas and Missouri. By this time R. multiflora had demonstrated its weedy quality and some viewed RRD as a way to combat this invasive. In some areas, the rose rosette virus (RRV) that causes RRD was used as a bio-agent to try to control R. multiflora, with only partial success: not only does R. multiflora produce an excessive number of seeds, but these seeds can remain viable for ten years. Another downside was that rose rosette disease proved to be fatal to many of our dearly beloved roses, including the hybrid teas.

A wingless mite, Phyllocoptes fructiphilus, feeds on an infected plant and then moves on via wind currents. These microscopic mites carry and then introduce the virus into the new plant’s vascular system, thereby infecting the whole plant. They will remain on that plant until a wind wafts them on their way to another rose. 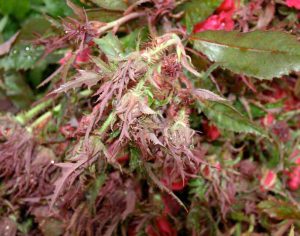 What does rose rosette disease look like? In the early stages, the disease usually, but not always, displays itself as red elongated growth marked frequently by an excessive number of thorns. The red coloration may last throughout the summer instead of turning green.

While it can manifest itself differently in different rose varieties, the key here is the word distortion. Flower buds, cane, and shoot growth will be deformed. Bear in mind that red growth is common in many rose varieties so it’s not the red color that’s worrisome but rather the distorted growth. The later symptom is the appearance of a witch’s broom, which is an indication that the whole plant is now infected. Death usually occurs in 3-4 years but it’s imperative to remove the infected bush before the mites can spread.

Cutting off the outwardly infected part is the equivalent of cutting off your arm when you have the flu. Your whole body has the flu virus and the whole rose carries RRV. The disease can move at different speeds through the plant so a few gardeners have reported success by cutting off the entire stem. However, this is risky because while you think you might have caught the disease in time, it could easily reappear, giving the mites a chance to wreak havoc on other roses. Because these mites travel via wind currents, all roses downwind from the infected shrub(s) are at risk. Cane removal should only be considered if there is only one rose in the garden. 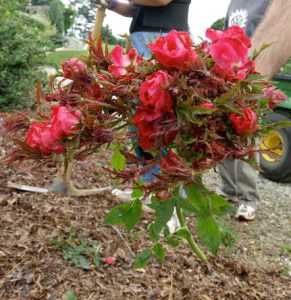 What should you do if you discover rose rosette disease on one of your plants? Before digging out the whole shrub, cover it with a large plastic leaf bag as your immediate goal is to contain these microscopic mites. Then dig out the plant, trying to get all of the root system. Do not compost the plant or any parts of the plant. The virus cannot survive in the soil without the roots so it’s important to get out all the roots. Once you have dug out the plant, grab it by the ends of the leaf bag, tie it, securing it well and take it out for disposal.

Theoretically it is safe to plant another rose in its place—provided you have rid the area of all infected roots—but I wouldn’t until you can determine how the mites arrived on your plant. This requires looking upwind to find an infected rose. If R. multiflora is near your property my advice is to try to get rid of it, which is much easier said than done. Inspect all purchased roses carefully before introducing them into your garden. A friend of mine bought a ‘Knock Out’ rose without noticing the distortion on one of its canes, only to discover later to her horror that the rose had rose rosette disease. Contrary to popular opinion, ‘Knock Out’ is no more susceptible than other rose varieties; because it is the most popular rose of all time, there are simply more infected ‘Knock Outs’.

There are no chemical cures yet for rose rosette disease and there are no ornamental roses that are known to be resistant to RRD. A “disease resistant” rose description does not pertain to RRD. Topical sprays are ineffective and mitocides that kill spider mites are ineffective on Phyllocoptes fructiphilus.

Right now, the only weapon you have in your arsenal is vigilance. Inspect all roses that come into your garden, scrutinize all roses in your garden on a regular basis, and keep an eye out on all roses that are upwind from your property. Be especially leery of R. multiflora and realize that it can be both asymptomatic and infected. It simply takes time for the symptoms to appear.

A serious gardener for the past twenty years, Kit Flynn resides in Chapel Hill. She is also a Durham Master Gardener.