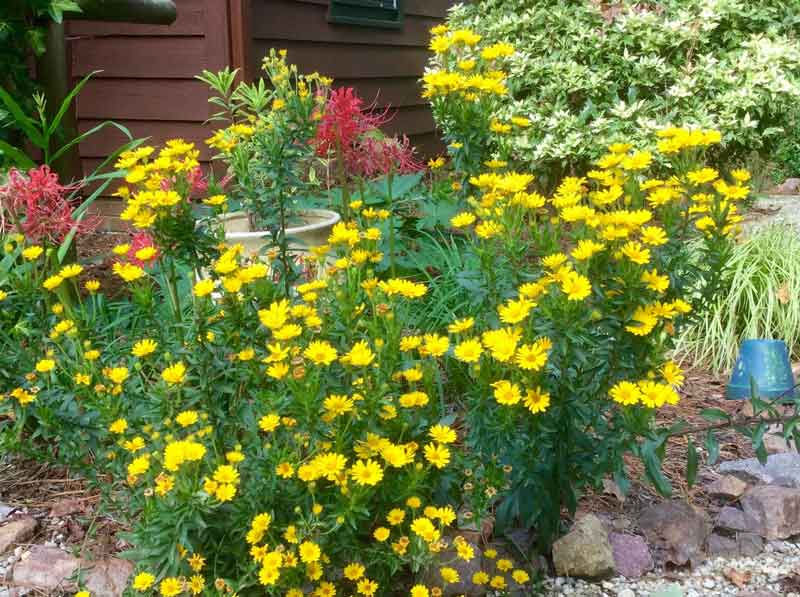 Like most homeowners, I’m constantly seeking new ways to reduce the time and money I spend maintaining my yard. In landscaping, as in other aspects of life, much can be learned from looking back.

My grandparents and great-grandparents were subsistence farmers whose lives were little changed from the 1700’s when their ancestors settled along the Northeast Cape Fear River. The labor required to sustain a household was enormous, but I know from family stories and the traditions that continued in my own childhood that these hardworking people somehow found time for flowers.

My great-grandmother grew gardenias beside her well and had Korean boxwood (Buxus sinica var. insularis) hedges. A great aunt is remembered for her “Sultanas” known today as impatiens, which she wintered over indoors and planted outside in spring. My paternal grandmother loved flowers and was a skilled propagator who rooted rosebushes in sand under mason jars. 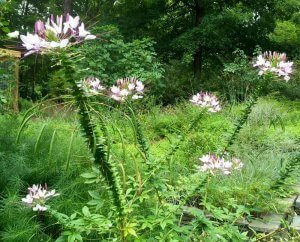 Also prevalent in these farm gardens were a variety of annuals and biennials grown from seed, many of which were heirloom plants handed down over generations. In some cases the seeds were saved and planted later, but often the sowing was left to the plants themselves.

Judy Mobley, a friend from home, grows a variety of cutting flowers including zinnias, marigolds, and cockscomb by letting the seeds fall then mulching them lightly. In spring she simply thins the seedlings and removes any that stray beyond her desired locations.

When we began making our current garden, perennials were all the rage, and annuals were out of favor. Nurserymen touted the advantages of long-lived perennials over annuals that had to be replanted each year. That many perennials, especially hybridized ones, have to be divided periodically to remain vigorous was often overlooked. Today landscape designers such as Claudia West are again emphasizing self-seeding annuals and perennials to “cover ground” and out-compete undesirable weeds.

My husband established biennial foxglove (Digitalis purpurea) in our borders by scattering seeds from our previous garden. Those seeds produced plants the first year, but no flowers. We planted flowering foxgloves from a nursery that season to ensure mature plants in alternate years. Descendants from those original plants have persisted in our garden for 25 years.

Progeny of a few annual spider plants (Cleome hassleriana), given to us by my sister-in-law many years ago, continue to thrive. This vigorous self-sower has to be thinned aggressively, but its resistance to deer more than repays the effort spent removing excess seedlings. Another heirloom favorite, larkspur (Consolida regalis), has not reseeded on its own for us, but scattering the seeds directly on the soil’s surface in fall produces a reliable show in May.

Since the beginning, I’ve wanted to increase the number of Southeastern natives on our property. Both propagating them from seed and encouraging them to sow themselves have been cost effective ways to do so. In the woodland garden, I’ve used a simple direct sow method to establish fernleaf scorpionweed (Phacelia bipinnatifida) by scattering the seed and marking the location with a plant tag. The tag makes it easy to identify the seedlings for this deer-resistant biennial when they emerge in late summer. 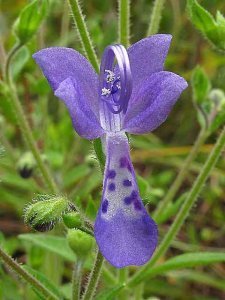 I acquired Maryland golden aster (Chrysopsis mariana) for my sunny border and some part-sun locations by sowing the seed in pots, then transplanting the seedlings. Golden asters self-sow modestly—never as many as I would like to have in September when their attractive gray-green foliage is topped with bright yellow flowers.

Most natives that I’ve grown from seed are perennials. Some, including golden aster, are considered “short-lived,” but can maintain their presence by self-sowing if the gardener doesn’t object to plants moving themselves around a bit. Indian pink (Spigelia marilandica) is a long-lived perennial that also successfully self-sows. Indian pinks I planted 15 years ago have increased and joined forces with mouse-eared coreopsis (Coreopsis auriculata) to create a maintenance-free under planting for a large dry-shade area in my garden.

Self-sowing flowers do come with some precautions. Heavy applications of mulch will limit self-sowing, while extremely rich or highly amended beds can produce too much of a good thing. Over-irrigation might also create an over-population of seedlings. In my own garden, I’ve mostly made use of self-sowing natives in areas where I’ve had difficulty establishing other plants.

Annuals often self-sow more vigorously than perennials do, and so they warrant extra caution. Last year I planted a couple of forked blue curls (Trichostema dichotomum) in the gravel near our driveway, and this year I have at least 20 plants. The brilliant blue flowers in September are worth taking a risk along the driveway, but I would never release them in a border.

In the early 1900’s, departments of agriculture in most southern states created publications to share information with farmers. North Carolina’s Agricultural Review remains in publication and is online. A classified in a current edition turned up “old-timey Cockscomb and Sunflower” seeds available for a few dollars.

The North Carolina Botanical Garden provides its members up to eight free packets per year of seeds native to our region, and charges $2 per packet for non-members.

The Thomas Jefferson Center for Historic Plants sells heirloom flower and vegetable seeds produced in the gardens at Monticello.

Select Seeds is a commercial, online source for heirloom and native seeds.

You can also ask a native plant nursery—like the many advertisers in this issue—for seeds and plants.

*Reseeds in sandy or other loose soils, less likely in clay.