The plant family Styracaceae provides Southern gardeners with a few of our most striking and useful trees and shrubs. The well-known Japanese snowbell (Styrax japonica) and its many selections is a good example. Our native Carolina silverbell (Halesia Carolina) is another.

Ironically, though, as common as some genera of Styracaceae are, other equally wonderful taxa remain off the gardening map, being seen, outside of botanical gardens, infrequently at best. Take for instance Sinojackia rehderiana, or Pterostyrax hispida, small trees unquestionably showy and easy to grow. But the cream of the crop among the lesser-known small trees has to be Melliodendron xylocarpum. 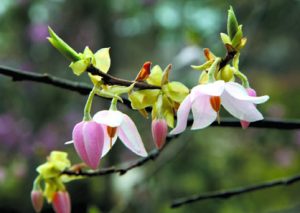 However you choose to pronounce that mouthful of letters, Melliodendron xylocarpum (mel·lee·oh·DEN·dron  zy·lo·CAR·pum) is a simply wonderful addition to the palette of small spring flowering trees.

Its flowers begin to emerge as bright pink buds in mid-March prior to the leaves, and ultimately open into wide, flaring white bells about two inches across. The texture of the flower petals is rather fleshy, and it actually has a subtle sparkle in the sunlight as if silver dust were sprinkled on the surface. The tree’s branching habit is essentially horizontal, and the flowers, produced singly in the leaf axils of the previous year’s growth, face downward in a fashion that makes them easy to admire from below. On warm days one can detect a slight sweet fragrance. Flowering usually lasts for a couple of weeks, and otherwise the tree is rather clean, handsome and free of bad habits. It doesn’t seed around, although you might wish it would.

Melliodendron is a monotypic genus, meaning that M. xylocarpum is the only species in the genus. In the wild it is found on forested slopes in the mountains throughout south central China. Though in nature it grows in the sub-tropics, like many species from this area of China it is perfectly hardy in the cooler winter temperatures of the southeastern United States. J.C. Raulston was probably among the first to introduce this plant to Southern landscapes, bringing in a specimen in the mid-1980s.

Melliodendron is sometime assigned the common name of Chinese parasol storax, but there is no reference to the authority of this as a common name. Perhaps someone coined it as a more easily pronounced convenience.

Fall is an ideal time to plant Melliodendron, but finding a source for it may prove a bit of a challenge. Retail nurseries that offer such rare gems are few, and often sell out of stock quickly. Our local nurseries that specialize in uncommon and unique woody plants are a good place to start. Or ask your local garden center if they can order it for you.

Byline:
Paul Jones is curator of the W.L. Culberson Asiatic Arboretum at Sarah P. Duke Gardens. You can read his arboretum blog at http://asiaticarboretum.blogspot.com.