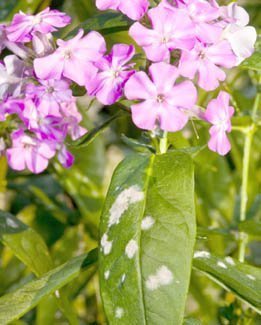 Fortunate is the gardener who hasn’t had to combat powdery mildew in the late spring.

Powdery mildew thrives when the temperature ranges between 60° to 80° in humid climates—just what the weather offers in the Triangle in late April and May. Appearing as patches of grayish white on the top of leaves, powdery mildew is one of our more unattractive aspects of gardening.

This fungal disease is host specific, needing a specific species if it is to survive. For example, the strain that attacks monarda leaves your phlox alone. Those white patches on the tops of leaves produce spores that become airborne. During the winter these spores are able to survive in leaf and plant debris in resting structures called cleistothecia. In the spring the cleistothecia release their spores, which the wind picks up and delivers to awaiting plants—and the cycle begins all over again.

Different plants react differently to the effects of powdery mildew. Those plants such as lilacs that develop the disease relatively late in their growing cycle easily survive the fungal infection whereas begonias will lose their leaves and display poor growth. Some rose cultivars are more susceptible to powdery mildew than others.

There are certain things that Triangle gardeners can do to prevent or control powdery mildew.

Avoid overhead watering as this increases humidity. Water the plant roots in the morning.

Provide good air circulation to these plants, if possible.

There are several organic fungicide options for homeowners including the use of horticultural oils, NEEM oil, bicarbonates, and sulfur. Remember that the use of any chemical fungicide requires care and it is imperative to read the label recommendations.

Cornell University at one point advocated using a spray of 1 tablespoon baking soda with 2½ tablespoons SunSpray UFP® horticultural oil mixed in one gallon of water. However, the latest research indicates that spraying with a baking soda mixture can harm plants as it can build up to toxic levels.

The best method to employ in fighting powdery mildew is to plant disease-resistant cultivars. With a little research powdery mildew does not need to be problem in the garden.

Byline:
Kit Flynn is a Durham Master Gardener and a member of the Advisory Committee of the Durham Garden Forum.