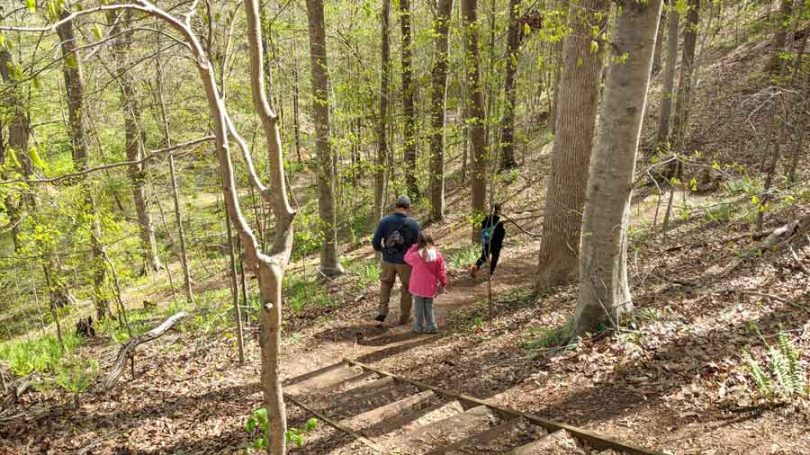 Swift Creek begins to look more like a small, swift-flowing river here. Away from the creek, there are vernal ponds where amphibians from the surrounding area breed. Cool north-facing slopes rise steeply, clothed in beech trees, some thought to be more than 200 years old. Plants found here are often more associated with the North Carolina mountains. There is a rich herb layer and an array of ferns. It’s said the area was brought to scientific attention by a North Carolina State University botany student out walking his dog, and today the WakeNature Preserves Partnership calls the preserve a WakeWonder.

The small gravel parking lot is easy to miss on the west side of Holly Springs Road. Near the entrance watch for unusual Shumard oaks. The vegetation here also conceals chameleon-like anoles. There are quite large trees in the floodplain, with a canopy that includes pines, large sweetgums, tulip trees that bloom in May, American elms, and others. 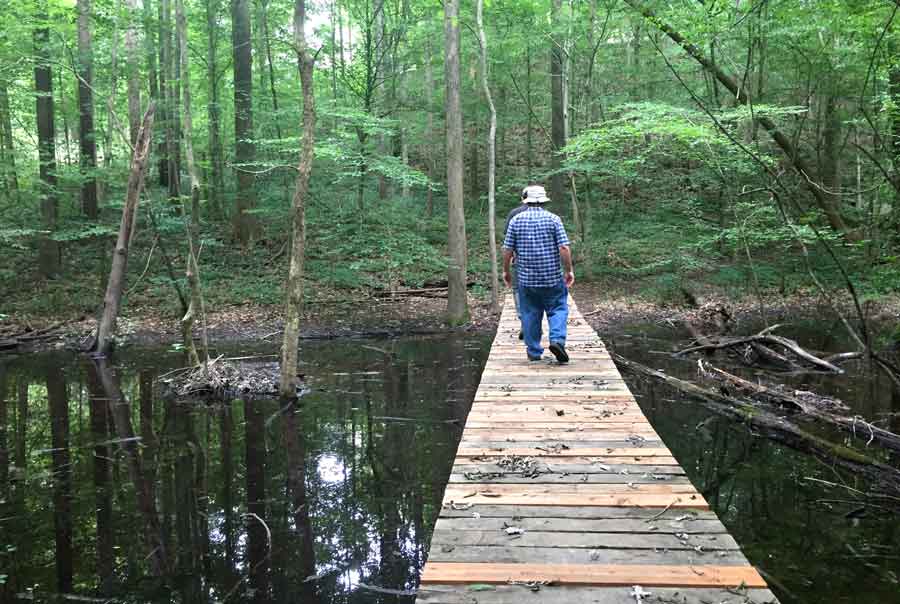 Later successional species include swamp chestnut and cherrybark oaks and bitternut hickories. Hollies are common understory trees throughout. Thick muscadine grape lianas hang from the treetops and hummingbird-attracting crossvines are common. Near the creek, which seems to have formed natural levees, there are river birch, green ash, ironwood, and umbrella trees, and deciduous magnolias to about 35-feet tall with huge leaves and flowering around the end of April. Riparian shrubs include bladdernuts, some still sporting last year’s seed capsules, mayapples, Atamasco lilies, and jack-in-the-pulpits blooming in spring. Kingfishers, beavers, muskrats, and even otters have been seen here. Downstream are several threatened to endangered freshwater mussels and vertebrates, though there are few aquatic species.

Stands of cane and lizard’s tail, blooming in June, grow in pools along the main trail. Overcup oaks dominate these swamps and sloughs. This is a likely breeding site for marbled and other salamanders. Spring peepers and upland chorus frogs breed now, followed later by leopard frogs from the creek. These pools attract wary wood ducks and barred owls can be heard calling nearby. Bright green filamentous algae grow in the clear ditches with the increasing sunlight.

You can hear Carolina wrens, robins, and cardinals chirping as they settle in at dusk. The preserve is on the North Carolina Birding Trail, with 126 species. Wintering species include brown creepers and winter wrens and sapsuckers tap out rows of holes. The Triangle Land Conservancy says April to early May and mid-August to mid-October are the richest times to birdwatch here. A dozen species of migrating warbler can be found on a spring day. In late March, waterthrushes appear at the far west end and there are also thrushes, Acadian and great crested flycatchers, and parula and hooded warblers. Breeders include yellowthroats, ovenbirds, and cuckoos. 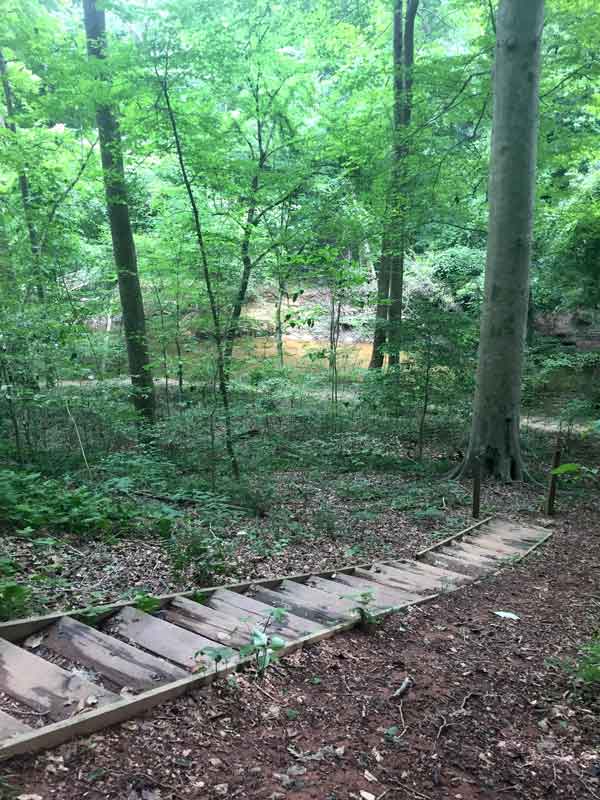 The steps of the narrow Stairway to Heaven climb 100 feet, offering a wide view through the trees at the top. The bluffs here are not as steep as at Hemlock Bluffs Nature Preserve just upstream but are still precipitous for those not sure-footed. Milky quartz rocks poke out, and these slopes probably arose the same way as those at Hemlock Bluffs, where the igneous bedrock formed 500 to 600 million years ago and was fractured by faulting 220 million years ago, allowing the deposition of erosion-resistant quartz. The path side of the creek is much flatter.

The area was selectively logged 75 to 100 years ago, but today there are very large trees here. The smooth, pale bark of the elegant, somewhat slow-growing beech contrasts with the dark, striped bark of fast-growing Northern red oaks on the hillsides. Younger beech retain their picturesque papery leaves into spring. UNC Botanist Albert Radford called this “the largest continuous stand of mature beech bluff forest left in the North Carolina Piedmont.” 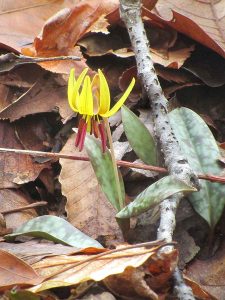 The trail descends to the golf course greens at Lochmere’s Brickhaven Trail. Cary’s Swift Creek Greenway, said to be the USA’s first recycled greenway, is nearby. While less than a mile long, plan to spend time in Swift Creek Bluffs Nature Preserve as you are transported from the suburban life of Cary to these primitive forests.

—
Michael Pollock is a freelance writer who gardens in Durham. His work has appeared in Carolina Gardener, The N&O’s Durham News, Chatham County Line, Carrboro Free Press, and northeastcreek.org.