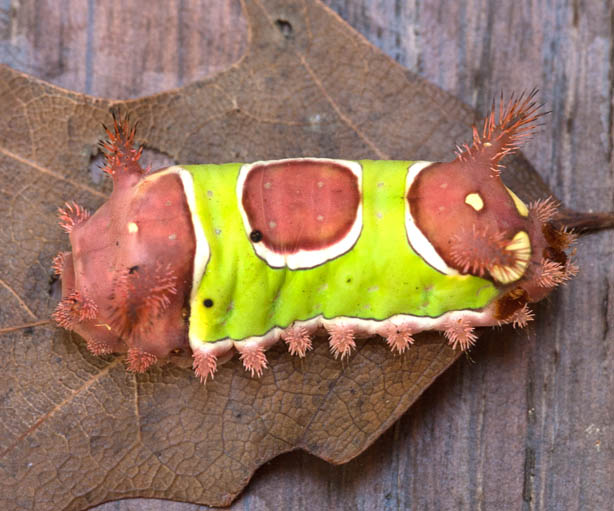 “E-E-E-Y-O-W-W-W! I’ve been stung by a bee!” Or maybe it was a wasp…or a hornet…or something else. Would you believe a caterpillar?

Unknown to many gardeners in the Triangle, there are several indigenous larvae from the insect family of butterflies and moths (Lepidoptera) that have the capacity to inflict a painful—and sometimes even serious—sting to any unsuspecting person who might accidentally brush against one of these little beasties.

Unlike bees, wasps and hornets, which use their stingers in a deliberate, offensive manner, these caterpillars are docile creatures. Only when someone accidentally touches any of these caterpillars’ poisonous spines or hairs does a sting occur. Upon contact, the stiff, hollow hairs pour venom onto the offending arm or leg to ward off an “attack.”

Although most of these stings are mild, a person’s sensitivity is the determining factor to the severity of the injury. Normally, a sting from one of these caterpillars results in a painful welt with some numbness around the stricken area. However, people allergic to these stings could possibly suffer from nausea, headaches, convulsions or even shock. The number of stings can influence the severity of a person’s reaction. Some of these caterpillars live in groups, so if you walk into one of them, you have a good chance of meeting the rest of the clan.

Listed below are some of the more common stinging caterpillars in this region.

Buck Moth Caterpillar. This is a fairly large caterpillar that can grow to almost two inches in length. Its coloring is normally dark brown or purple with yellow spots running along its sides, and it has a reddish head. Each body segment has little patches of hair that can put a really good “bite” on a curious hand or wayward leg.

Io Moth Caterpillar. Another large caterpillar, this colorful insect can grow to about three inches in length. If that doesn’t make it stand out enough, this larva is painted light green with a red stripe on each side of its body. Its defensive armament is arranged similar to that of the buck moth’s with clusters of green and black poisonous spines on each body segment.

Hag Moth Caterpillar. Although small (three-quarters of an inch long), this is certainly one of the oddest-looking caterpillars. With nine pairs of fuzzy appendages, this brown-colored larva looks more like a hairy leaf. The hairs of this “leaf” can inflict pain on anyone who comes into contact with them.

Saddleback Caterpillar. Even though it only reaches about an inch long, its distinctive coloring makes this caterpillar stand out. The saddleback is light green with a purple front and rear. Also, there is a purple spot on the middle of its back that forms a saddle shape for which it is named. It’s really a pretty caterpillar, but the poisonous hairs circling its sides will prevent a curious hand from performing closer inspections.

Puss Caterpillar. This caterpillar’s appearance is, to say the best, dull. Less than an inch long, this larva is pear-shaped and is covered with off-white or gray to brownish hairs. Underneath these hairs are rows of venomous spines that ward off attacks. Pound for caterpillar pound, this little beast has one of the nastiest stings around. And the larger this caterpillar is, the more potent the sting.

First aid for a caterpillar sting is similar to that of a bee sting. Wash the area around the sting with a solution of soap and water, and examine the wound to see if any poisonous hairs are still lodged in the skin. If so, carefully remove them to prevent further irritation. Applying an ice pack and a baking soda poultice right after the sting can help reduce pain and swelling. Watch for allergic reactions and contact a doctor immediately if complications occur.

In this area, there are other stinging caterpillars that you can encounter, so the best thing to do the next time you spot one of these strange, fuzzy visitors is to observe, but don’t touch. If it is not causing extensive damage to your favorite plants, the caterpillar should be left alone to continue on its journey through the garden.