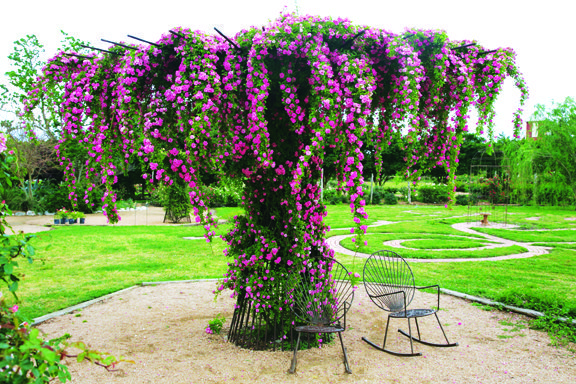 My fellow Durham Master Gardener, Lise Jenkins, was the first person to alert me to the many stories our plants have to tell. Before you accuse me of holding conversations with my plants, let me explain. Suppose you were selling your house and wanted to tell the new owners about specific plants: You would be relating their stories to the buyers. I admit that I have some tales to tell.

The first story I always relate refers to Rosa ‘Peggy Martin’ who is an honored guest in my garden. Because she survived a two-week burial in the toxic stew wrought by Hurricane Katrina, she is also known as the “Katrina rose.” When the son of the man who helps me in the garden was diagnosed with childhood leukemia, I gave him a ‘Peggy Martin’ plant. When I e-mailed the rosarian Peggy Martin to tell her, she replied that ‘Peggy Martin’ had just won the designation as the rose for cancer survivors. This clearly was a sign and I now look at this rose with new heroine worship.

I planted the camellia ‘Berenice Boddy’ fifteen years ago. ‘Berenice’ is now 15 feet tall, standing tall and proud, even when exposed to the harsh afternoon summer sun. Why is she so special? Not only is she lovely, she is the mother of many of our cultivars. Without ‘Berenice’, many of our popular Camellia japonica cultivars would not exist.

A windmill palm appeared in my garden at least ten years ago as a two-foot high specimen. It didn’t garner much notice until suddenly one day it loomed large in front of the big Japanese maple behind it. The contrast between the green palm leaves and the feathery magenta leaves of the maple soothes me as I look out on them from my office window. Simply put, my baby has grown up.

I have two Rosa roxburgii, two chestnut roses. Nancy Goodwin of Montrose fame has one that is a small tree and when I saw it I knew I needed a rose tree—not a tree rose, which is a manufactured creation, but a rose that wanted to be a tree. One is now claiming a lot of space. Normally I prune my roses in the early spring but this R. roxburgii is safe from the clippers. The only thing I have done is to prune out some of the secondary canes, leaving just three main canes for support. She’s well over seven feet tall and I hope I’m around when she hits fifteen feet and the main canes approach ten inches in diameter.

I have a daylily that is very special to me: ‘Kit’s Circus Wagon’. You’re not going to find it on the registry because Jim Massey never registered it. One year he had a daylily sport he was excited about and told me that he wanted to name it ‘Kit Flynn’—a gesture that brought out the ham in me. However, he co-owned this beauty and the co-owner felt that ‘Kit Flynn’ was too blah a name. My prancing stopped at the thought I was blah. Jim came back with ‘Kit’s Circus Wagon’, which the co-owner accepted. I immediately gave specimens to all my dearest friends. Two sit proudly—I like to think—in the center of the garden where they direct traffic.

The last story I would tell concerns my winter hazel, Corylopsis, alas of an unknown species, although I suspect it’s C. spicata. A classmate recommended it to me fifteen years ago when we were both taking a graduate course at Duke. I was new to gardening then but on her recommendation I planted this unknown Corylopsis, which has delighted me ever since. I look at the small tree and see Duke and “The Plantation”—the name of the course. Its bloom period is just two short weeks but what wonderful two weeks they are!

So look around your garden. See what you can remember—and mentally record these stories the plants tell you.