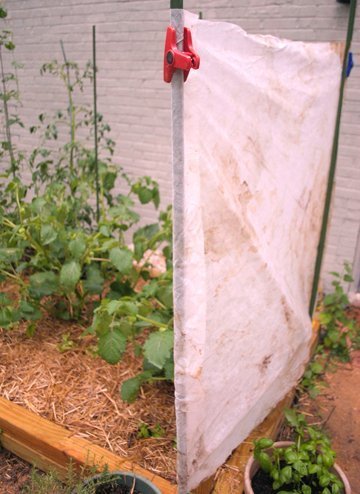 In North Carolina, we’re no strangers to long, hot summers. But growing food in hot weather can be challenging.

Plant stress is probably the biggest challenge. Daytime temperatures over 90 degrees cause plant pollen to die; gardeners must then wait for cooler temperatures for new flowering, pollination, and fruit set. Hot nights mean plants don’t have a chance to recover from the heat of the day; their metabolic processes continue 24 hours, instead of taking a break. Hot nights also mean better conditions for fungal diseases to thrive, and water evaporation from the soil continues.

Fortunately, many strategies exist for coaxing a bountiful harvest from your parched garden plot. Following these tips will help ensure a successful growing season.

Select vegetable varieties carefully
Ira Wallace, a worker/owner of the Southern Exposure Seed Exchange in central Virginia, board member of the Organic Seed Alliance, and author of The Timber Press Guide to Vegetable Gardening in the Southeast, advises gardeners to consider what crops they want to grow, then select resilient varieties of those plants that have been selected to cope well with local conditions. In some cases, this might mean tailoring your expectations.

“We harvest lettuce all year,” says Wallace, “but in summer, we expect it to be treated as ‘cut and come again,’ or we harvest juvenile heads. They get bitter if they grow bigger.” Gardeners might also try other, more heat-resistant leafy crops and save the lettuce for the fall garden. “Amaranth is a good heat-resistant leaf vegetable. You want to pick the new growth. It’s just like basil; you should give it a haircut, so you get the new growth.” Wallace also recommends green chards and Malabar spinach (not a true spinach) as spinach substitutes. Leaf beet is a chard relative with tender leaves and thin stems that performs very well in hot weather. Maturing in 55 days, it can also be grown into the fall and will withstand light frosts.

With any vegetable, “you want something that’s going to be a bit of a mixture, a jack of all trades,” says Wallace. “[A particular variety] may not be the most disease-resistant, or the most drought-tolerant, or the most flavorful, but it should combine all of those factors well.”

Plants in the nightshade family—tomatoes, eggplants, peppers, and potatoes—in particular don’t perform well in high nighttime temperatures. Success depends on shepherding the plants from one cool spell to the next. Try using short-season varieties and make several sowings of them.

“In the lower south, they use varieties with fast dates to maturity. They’ll get one crop out of them and replace them with new ones,” says Wallace. Cherry tomatoes, which are closer to the species, are much more resilient than their larger-fruited brethren, or try smaller-fruiting varieties of standard tomatoes. Wallace recommends ‘Amy’s Sugar Gem,’ an open-pollinated cross between a cherry tomato and a larger-fruited heirloom. For slicing tomatoes, she recommends ‘Costoluto Fiorentino,’ a medium-sized, deeply lobed heirloom that performed very well in the heat at the University of Georgia trials.

Southern peas, such as crowder peas or black-eyed peas, perform much better than green English peas. “Black-eyed peas are bulletproof,” says Wallace. “Sweet potatoes are easy for new gardeners, and then you can brag about how much you’ve grown. And lots of people like summer squash, but lots of bugs like to eat summer squash. So I would grow ‘Tromboncino,’ which is very buttery. You can harvest it when it’s immature—you might pick two the same day, one at four inches long and one at six inches, and see which texture you like better.

Strategies for helping plants through hottest weather
Of course, watering vegetables deeply—one inch per week—by drip irrigation or soaker hose, and a thick layer of organic mulch, replenished regularly, are essential to summer vegetable success. According to the National Weather Service, in July up to half an inch of water may be lost from the soil to evaporation.

“People underestimate how often they’re going to have to water,” says Wallace. “It rains all the time, but evaporates in two days.”

Shade cloths and screens are another way to keep plants going through the hottest weather. “Any kind of cloth will work,” says Wallace, “but if you are putting it over the plants, it shouldn’t touch. You need hoops to elevate the cloth and provide air circulation.” She doesn’t use any cover over her plants unless it permits water to penetrate. She recommends tulle (the fabric used to make tutus), window screens, or fabrics like Protek-Net, particularly designed to shelter plants. If you don’t want to cover your plants, which would exclude pollinating insects, make a screen with the cloth to shade the plants from late-afternoon sun. The screen can be as simple as clipping a length of fabric to two tall garden stakes, set between your plants and the direct sunlight. Acting like a patio umbrella for your plants, a screen that offers a few degrees of shade can make a big difference in your vegetable garden’s performance.

Select your crops carefully, water and mulch deeply, and shade your plants from the hottest sun, and you’ll enjoy harvests throughout the most unforgiving days of summer.

—
Amy Hill is a Durham County Master Gardener, and blogs about gardening at MissingHenryMitchell.com.