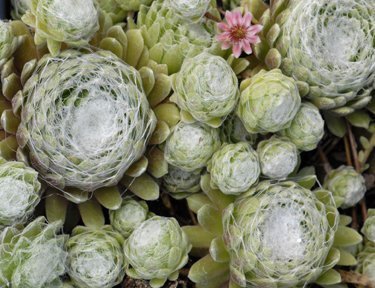 We are somewhat spoiled in the South with colorful, bodacious plants to create lush landscapes, but have you considered succulents to lend the same look?

Succulents have spoken to my southern soul ever since Debra Lee Baldwin made succulents a household word with her first book on the subject in 2007. Designing with Succulents was an immediate hit. Even after eight years in print, her emphasis on these uncommon specimen plants still ranks very high on the Amazon list of books. More succulent books followed. Once thought to be only suitable for the Southwest, we began to see succulents in a whole new light. 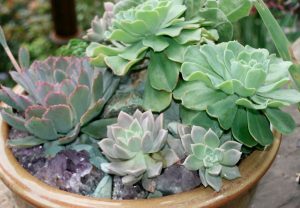 Botanically, succulents are any plant with thick, fleshy (succulent) water storage organs, which store water in their leaves, stems, or roots. Some are hardy for us, others not. But don’t let that stop you. These architecturally dramatic plants have incredible leaf forms, colors, and plant shapes that are being used in southern gardens with abandonment.

Granted, the hardiness of many of these colorful gems in powder blue, sunrise orange, sunset yellows, and even maroon reds, are not hardy in the Triangle, but many are. Those that aren’t, winter over nicely in a dry, sunny spot indoors. They may look stressed from overwintering inside but bounce back once outdoors again in the hot southern seasons.

One of the most common succulents is what is known as hens and chicks, Sempervivums. 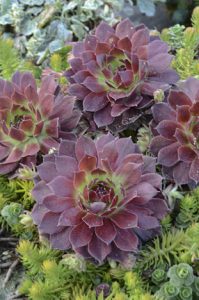 These unique, hardy plants come in a variety of colors ranging from pink, red, purple, and green. Each rosette produces new offsets in the spring that root quickly, ultimately spreading to form dense cushions of attractive ground cover. One such Sempervivum is S. arachnoideum. This succulent has a layer of cobwebbing over the leaves. The leaf tips are connected by a white cobweb of hairs. There are many different varieties in other colors and degrees of cobwebness.

Another hardy succulent for the Triangle area is the Joyibarba. Often called rollers, because they have chicks that mound up on top of the mother plant only to roll off and create a family of their own.

Most of us are familiar with Sedums, known as stonecrop. Stonecrop is among the easiest perennials to grow and to propagate. To make more, just break of a branch from the mother plant and stick it where you want to see new ones fill in.

Other great hardy Sedums including, Sedum rupestre ‘Angelina’ and Sedum sexangulare, are also know as the tasteless stonecrop.

In you container garden, you can expand your hardiness range of succulents. Containers are a good place to put non-hardy succulents since the containers can be carried inside to overwinter.

One of the most popular uses of succulents is to display them as a group in a large hyper-tufa trough. To add a spiller to your trough arrangement, try a trailing succulent to soften the edges. The succulent, String of Pearls (Senecio rowleyanus) makes a great trailing plant for your container combination or maybe try Donkey’s Tail (Sedum burrito).

My personal favorites are the Aeonium spp. Just typing the word makes me wistful, because I received a really special one from a friend after she passed away.

The black Aeonium arboreum ‘Zwartkop’, also known as the black rose, has rosettes of fleshy dark purple leaves that look black. Another favorite is the A. cameron with blood red stems growing and twisting in all directions with jagged edges.

No matter what kind of succulent you are growing, the care instructions are similar among the different species.

Sunlight – Succulents prefer bright light, such as found in a south-facing window or in a full sun section of your garden.

Temperature – Succulents are much more cold tolerant than many people think. As in the desert, where there is often a marked contrast between night and day, succulents thrive in colder nights, down to even 40 degrees.

Water – Allow your succulents to dry between waterings and do not underwater. During the winter, when the plants go dormant, cut watering back to once every other month.

Soil – Succulents should be potted in a fast-draining mixture that’s designed for cacti and succulents. In the garden, be sure to amend the soil so that it is fast draining.

Fertilizer – During the summer growing season, fertilize as you would with other houseplants. Stop fertilizing entirely during the winter.

Succulents are ideal plants for the gardener with limited space and limited time. They are carefree plants requiring very little maintenance.

Learn the simple secrets of how to make your very own succulent wreath, including step-by-step instructions and images

Helen Yoest, author of “Plants With Benefits” and “Gardening With Confidence,” is an award winning garden writer and sustainable gardening caring for her half-acre wildlife habitat, Helen’s Haven.