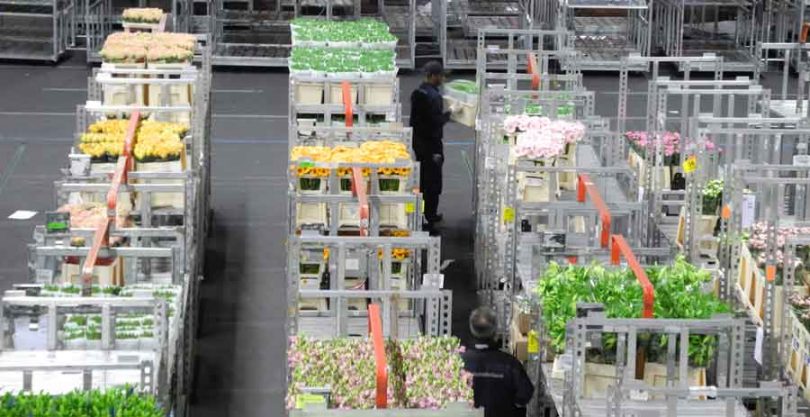 When my husband and I lived in Europe for his job, we took advantage of any learning opportunity when my husband had time to travel. An American coworker recommended that we visit the Aalsmeer Flower Auction because he knew about our interest in gardening and our passion for The Netherlands.

My husband, with his mathematical background, was attracted to the business side of flowers and plants. Logistically, it was a bit of a challenge because Aalsmeer is southwest of Amsterdam. Nonetheless, we figured out how to use the transportation options since The Netherlands offers plenty such as trains, buses, trams, bicycles, and taxis. We also had to arrive early because of the nature of this business: organic products that start the day fresh and young and deteriorate from there.

When we arrived at the Aalsmeer Flower Auction, we bought tickets to this delightful show, which was not far from the area’s international airport. Our tour group was small on this spring day, and the guide was friendly and fluent in English. We started in a large facility where cut flowers from all over the world arrived. These were moved as quickly as possible through the distribution center because they were perishable. Here, the guide showed us how the flowers and plants were efficiently unpacked and organized for their upcoming auction. Masses of flowers were grouped, placed on carts, and shuttled around with warehouse equipment. Every minute counts as they were readied for the auction stage.

The guide then led us to the exclusive arena where these flowers were presented for the world market. We watched as each flower cart rolled in front of an audience of bidders who represented the world’s florists. With this auction, the bidding started high allowing those with deep pockets to secure what possibly was an unusual and deserving flower of a big price tag. As the clock ticked down and the bids were not forthcoming, prices dropped. A lower price or bid allowed the most average of florists to get their needs met without breaking the bank. On and on, it goes. Cart after cart was wheeled before the bidders.

When we exhausted our observation of the bidding and buying, the guide took us to the area where the flowers were now repackaged for transit back to the airport. They were labeled with their final destination which had been determined by the auction.

It now came full circle. For example, that beautiful, exotic flower from Israel arrived that morning in Amsterdam on a cargo flight. It was then sent to Aalsmeer for the auction. After its final bid and it was sold, it was dressed for shipment and returned to the airport. It was put on a flight to Southern California where it arrived at an exceptional florist near Hollywood. The flower had been selected for a showy arrangement at an extravagant social event.

As my husband and I completed the tour, we stopped in the gift shop near the entrance to the facility. I bought some small, spiral bound catalogs for flower and plant identification. They were 9 Euros each.

After this tour, I felt awash in thoughts. How complicated is a vase of flowers? It’s not as easy as going into your yard to simply cut your own flowers from the garden. However, that’s not how this industry works. It offers a variety of fresh cut flowers that fulfills your wildest imagination. It can be complicated and expensive. It can be simple and affordable like the bouquet you created from your yard or bought at the local grocery store. I knew then that I would never look at a florist arrangement with casual interest ever again. I hope that you feel the same sense of awe when you visit this unique place. It’s the hidden business of the fresh cut flower and plant industry which is a global market. Now, that’s complicated.

Patricia Tibbits is a Wake County Master Gardener. She has resided and gardened in multiple states and countries with her husband.