Few plants have been so vilified and praised as Nandina domestica. For those who know and appreciate her, this shrub is also called Heavenly bamboo. How can a name be so at odds with itself?

Bamboo and nandina are more likely to be associated with the opposite of heaven. Nandina is not actually in the bamboo family; yet, it has a similar appearance to forms of bamboo. 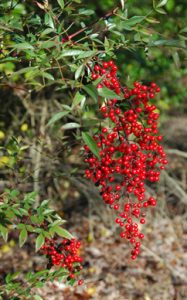 My introduction to Nandina was shortly after purchasing my first home. Walking around the yard, I was struck by how one plant seemed to dominate the landscape. Joe, my neighbor, informed me that those plants were “the much maligned nandina.” He went on to tell me that Southern Living magazine had used that moniker in an article about nandina.

He felt the criticism was unjustified because he considered it a terrific plant. “The reason it gets such bad play is that most people don’t know how to prune it,” he told me. After retrieving a suitable pruning tool, he proceeded to show me the proper way to shape a nandina. (The nandina prefers the layered look. Stagger the cane cuts at different heights with the tallest on the inside and the shorter to the outside of the plant. This will cultivate a full skirt of foliage at ground level.)

The Nandina is evergreen and populates zones 6 to 9. Nandina domestica has white flowers in the spring and berries galore in the fall for wildlife and holiday decorations. A native to China and Japan, it is a mainstay in an oriental garden. Nandina displays flashy fall and winter color, and can colonize by suckers or seed.

The Nandina’s flowers as described by Michael Dirr in the Manual of Woody Landscape Plants “are not overwhelming but are refreshingly elegant as they stand and arch ever so slightly, framed by the elegant foliage.”

J.C. Raulston, in his book The Year In Trees: Superb Woody Plants for Four-Season Gardens, stated “Nandina is the embodiment of quiet grace in the garden, and as important is its ability to thrive under almost any landscape condition.”

With a minimal amount of care, it thrives in shade or sun. It can grow tall and leggy in shade and with minimal pruning transform itself into a living sculpture. It is great against the backdrop of a wall or fence. In full sun it can be used as a hedge anywhere from two to seven feet in height based on species selection.

Once maligned and the object of derision, the Nandina is now acclaimed and touted as one of the most useful plants employed in garden design. Propagated from seed, cuttings and tissue culture, many species are grown by North Carolina nurseries.

Byline
Hoyt Bangs, a Raleigh native and landscape designer is owner of WaterWise Garden Design. You may reach him at hoyt@waterwisegardendesign.com.