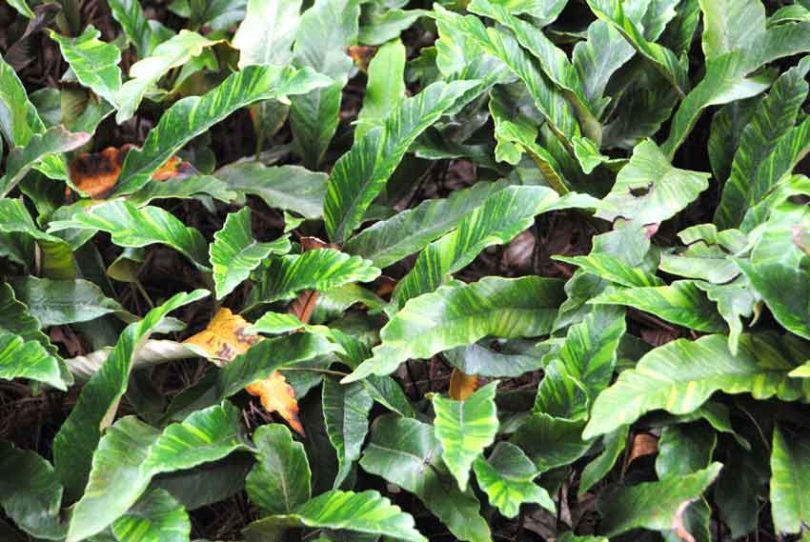 Ferns are much beloved in gardens for the lacy texture they provide and for their deer resistance. But did you know there is an entire group of ferns that missed the memo about being delicate and dainty, and instead provide bolder textures in the garden?

The so-called tongue ferns, Pyrrosia (not to be confused with hart’s tongue fern, Asplenium) are mostly found in the tropics across central Africa, India, Asia, and Oceania. They are distinguished by typically having strap-like leaves—long and narrow like a strap—or entire leaves without any lobes or frilly fronds like a typical fern, and by growing as epiphytes on trees and rocks. They usually have a felt-like bottom surface densely coated with silver or rusty-colored hairs. 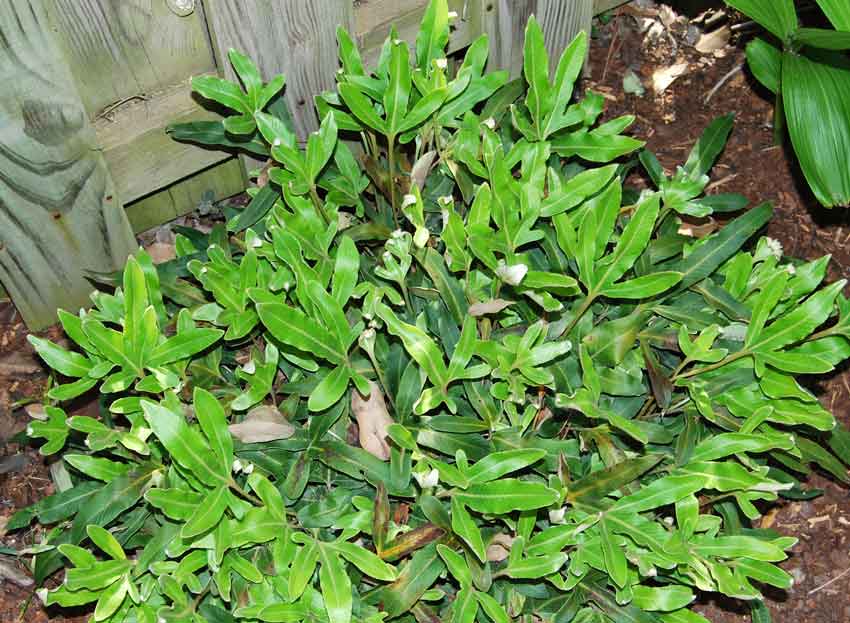 A tropical epiphyte does not sound like a great option for Triangle area gardens, but there are several Asian species which make outstanding, evergreen specimens in central North Carolina. The most commonly grown is Pyrrosia lingua, which spread slowly by stiff rhizomes or surface roots. The cardboard textured, 10-inch leaves are silvery or rusty felted on their bottoms and provide a fascinating texture year-round. In colder climates, tongue ferns are often grown in hanging baskets where the rhizomes slowly creep over the sides. In our zone 7b gardens, they grow outdoors quite well. 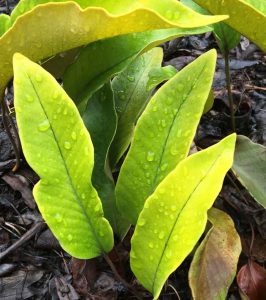 The Japanese are quite fond of these ferns and have selected more than a few variants. Perhaps the most popular is the chartreuse streaked form known as ‘Ogon Nishiki’. The subdued variegation appears like dappled sun on the fronds in the shade or even on a cloudy day. Other forms of this species eschew the typical strappy leaves adding irregular edges and crested tips. All make interesting garden specimens.

Less commonly available, but certainly available from specialty nurseries, are several other Asian species. Pyrrosia drakeana can grow to nearly double the height of P. lingua, while retaining much the same look, but with a slightly deeper, glossier, green upper leaf surface. In rich soil and regular summer water, this tongue fern can spread relatively quickly as compared to the typical tongue fern, creating a patch three feet across in only a handful of years. 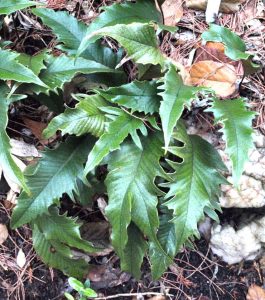 As with most plants, there are exceptions. There are a few tongue ferns which, while not showing typical fern fronds, are not so strappy. P. hastata is one such species with each frond separated into finger-like lobes and only growing to about six inches tall. Unlike the slowly spreading other forms, this species will make a tight clump in the garden.

Similar to most ferns, Pyrrosia prefer some partial shade in loose soil with regular moisture. They are sometimes accused of being a bit difficult to grow, but if planted on a slight slope in good soil, they are easy and attractive additions to the garden. In their first few years of establishment, they can be sensitive to drought, though with age they become increasingly tolerant of dry periods when they will curl up and look sad, though new fronds will emerge when moisture returns. Once well established, pieces can be divided from the main clump and passed along to friends or spread throughout the garden. A heavy layer of wet fall foliage dropped on them can be detrimental, but a soft rake or quick blast from a blower will keep them healthy.

Tongue fern’s stiff texture and evergreen foliage make them ideal companions for spring ephemerals, bulbs, and other shade perennials. They grow well around small trees and shrubs, providing a useful small-scale groundcover to hide the bare knees of your woody plants. While most other ferns disappear for the winter, Pyrrosia keeps the garden looking lush year round. Best of all, the deer will skip right over your tongue ferns to find something else to graze on—hopefully in some other garden.

Do you want to learn more about evergreen ferns and other winter gardening topics? Go to jcra.ncsu.edu.