Many home gardeners who grow fruit trees know that pruning is essential for best production. However, most don’t realize that a little training will make the tree more productive. There are two basic systems with several variations on each used to train fruit trees.

When using the central leader system the overall shape of the tree should resemble that of a Christmas tree—broader at the base and narrow at the top. Depending on the overall size of the tree, whorls of branches should be spaced about 18 to 24 inches apart.

A whorl is a set of three to four branches encircling the trunk of the tree at roughly the same height. The 18 to 24 inch spacing allows light to penetrate deep into the center of the plant. Fruit trees need light to produce flower buds and tasty fruit, so the deeper the light penetrates into the tree the more fruit the tree can produce. 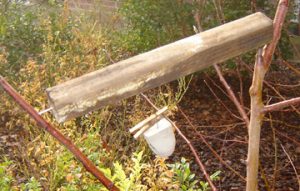 With a young tree the branches can be spaced by cutting the central leader about six inches above where the whorl of branches is desired. The first two or three buds below the cut will compete to become the central leader.
When these buds are about six to ten inches long select one to be the leader and remove the other two by pushing them off to the side. 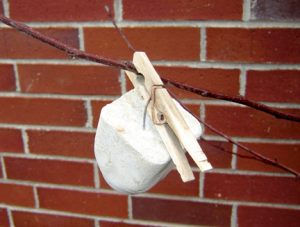 Branch spreaders can be commercially purchased or made from one-inch square lumber that has a finishing nail driven into each end and the nail head cut off. The nail provides a good anchor into the tree branch and the trunk. 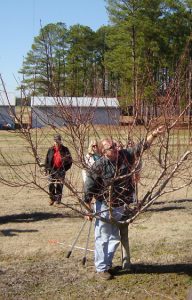 The second basic pruning system is the open center system. Peaches, nectarines and plums are examples of trees that are often pruned using this system. Using the open center system keeps fruit lower to the ground where it can be picked, and opens the center of the plant allowing fruit production along the entire length of the main scaffold or lateral branches. 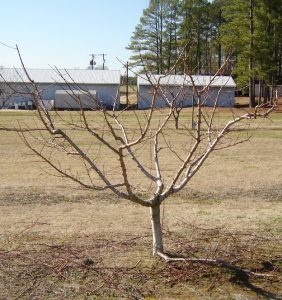 Trees grown with this system usually begin fruiting after the second or third year. The fruit will then act as the weight to keep the branches growing out rather than up. Each year the tips of the branches will need to be removed to encourage lateral branching to fill the entire space.

Photos courtesy of Shawn Banks.
—
Shawn Banks is a Consumer Horticulture Agent with NC Cooperative Extension. You may reach him at shawn_banks@ncsu.edu.