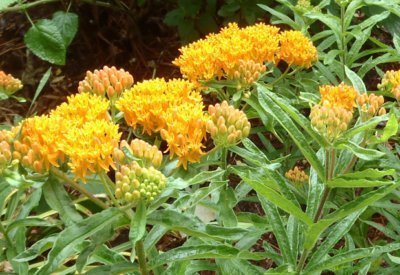 As gardeners we learn to expect and, eventually, accept a few setbacks along the road to creating our personal paradise.  A severe drought occurred in my current garden’s third year when – according to the old adage, “The first year they sleep, the second year they creep,” – my plantings should have been “leaping.” Instead some of my carefully selected perennials languished, and others disappeared.

Despite those disappointments, some plants, including many Southeastern natives, performed well that year.  More than ten years later, quite a few of these stalwarts return to delight me each summer.

Dry sites in my garden occur in two different forms. The most obvious is my sunny front border, which receives more than seven hours of sun in summer – including the most intense midday hours. The border includes two roses that I water by hand, but with no irrigation, I expect the remaining plants to largely fend for themselves once established.

Butterfly weed (Asclepias tuberosa) first distinguished itself as the only new plant I was able to establish in that terrible, drought-ridden year. Since then, it has proven to be not only drought-tolerant, but essentially maintenance free. My single plant has grown into a handsome clump that has never required dividing in the eleven years it has grown in my border. 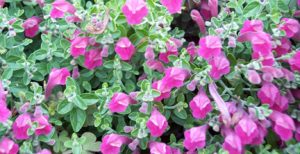 The long taproot that enables butterfly weed to withstand periods of drought makes mature plants difficult to relocate, but seedlings and young plants can be transplanted. Cutting plants back after bloom usually results in a second flowering. I’ve never experienced excess reseeding, but letting some flowers mature to seed can generate plants to share. The flowers of butterfly weed vary from bright yellow to deep red, but are most often orange. 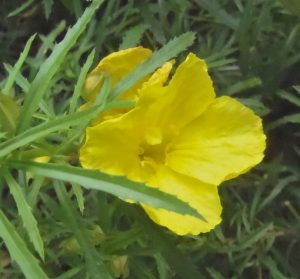 I’ve been fortunate to discover a few other North American natives that not only rival butterfly weed’s drought tolerance, but also flourish with little more maintenance than an occasional shearing or cutting back.  Two western cousins of our Southeastern species, shrubby sundrop (Calylophus serrulatus) and ‘Texas Rose’ skullcap (Scutellaria suffrutescens), bloom in the sunniest of sites through the hottest, driest days of summer.

Sundrops have a loose, somewhat sprawling habit, but skullcap forms a neat, velvety mound that is covered in hot pink flowers throughout the season. Neither plant requires any maintenance beyond an annual pruning in late winter before new growth emerges.

Although the red maples, sweet gums, and pines in our yard provide a cool retreat on the hottest of summer days, their fierce root competition leaves few resources for shrubs and perennials growing beneath them. Perennial choices for dry shade are limited, but several natives have been reliable and undemanding performers for me, returning year after year for more than a decade. 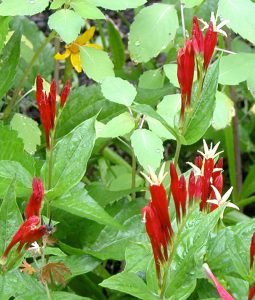 The most dramatic of these, Indian pink (Spigelia marilandica), bears masses of tubular, upright scarlet and yellow flowers in late spring and re-blooms if cut back after flowering. Like butterfly weed, Indian pink takes several years to fully mature, but requires little attention from the gardener.

Combining Indian pink, columbine (Aquilegia canadensis), black-eyed Susan (Rudbeckia fulgida), Turk’s cap (Malvaviscus drummondii) and ‘Fireworks’ Goldenrod (Solidago rugosa) created a lush, green mass highlighted with red and golden flowers from spring through frost. In rich soil, or under irrigation, any of these plants could become aggressive, but in my dry shade, only ‘Fireworks’ requires thinning to keep it in bounds.

As I learned years ago, periodic drought is a regular occurrence in the Triangle’s climate. Luckily for gardeners seeking low maintenance plants, quite a few natives take it in stride.