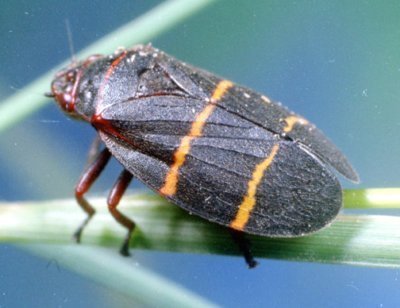 This spring I was asked, “What can be done about the white, webby masses in my Leyland cypress trees?”  After close inspection, I discovered the problem wasn’t baby bagworms as suspected, but spittlebug nymphs. After parting the spittle it was obvious there was a tiny insect inside.

Twolined spittlebugs (Prosapia bicinta) are one of two pests with “two” in their name. The twolined spittlebug is a pest aptly named for both the adult (twolined) and nymph (spittlebug). A true bug in the order homoptera, the adult is black with two orange stripes across its back. The nymph (immature stage) produces a mass of spittle to cover and protect it from predators.

Mostly known for the damage it does to turfgrass, especially Centipedegrass, this insect feeds by sticking its needle-like proboscis (mouth part) into a leaf and sucking the juices from the plant. Nymphs are becoming more of a problem on plants with needles and scales like junipers, pines, and cypress. However, they have been known to feed on several different plant species including flowers, shrubs, and trees. 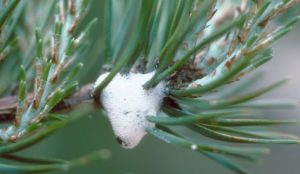 Twolined Spittlebug damage on a pine

Adult twolined spittlebugs are also a problem on hollies where they feed on leaves, killing the cells and giving the leaf yellow or white stippling (small dead spots). It’s sometimes difficult to tell what the problem is, because the adult flies away.

It has long been said that a healthy plant is less likely to be seriously damaged by insect feeding. This may be true for most insects, however, with the twolined spittlebug, when they feed in masses they cause major damage.

A non-chemical control is to crush the spittle masses before nymphs mature. For the home gardener acephate (Orthene) is the only chemical listed to control this insect. Be sure to follow label directions when using any pesticide in the landscape. 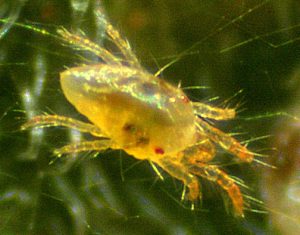 The other pest with “two” in its name is the twospotted spider mite (Tetranychus urticae). This nearly microscopic pest isn’t an insect at all. The first stage nymph may only have six legs, but as they mature this pest develops eight legs. These mites may be green, greenish amber, or yellow in color with two black spots on the body, just behind the head.

They feed on over 180 species of plants and often overwinter on common weeds and flowers including violets, chickweed, wild mustard, and blackberry. They feed by cutting open leaf cells with their sharp mouthparts and sucking out the juices. This type of feeding produces stippling on the leaf, looking similar to the feeding of the adult twolined spittlebug.

Another good way to tell you have spider mites is to look for small webs between leaves or on the top or bottom of the leaf. If the webs are present, but you can’t see the mites, hold a white peace of paper under the leaf and shake it a couple times. If you see tiny spots running around on the paper, you most likely have spider mites. Remember the color may be green, yellow or somewhere in-between, so they may be hard to see. Rub your thumb across the paper. If you see black streaking, you have just squished the spider mites.

Control spider mite populations by knocking them off the leaves with a steady stream of water from the garden hose. In severe cases insecticidal soap or horticultural oils may be sprayed. Be sure to spray beneath the leaves and on top. A second application will be needed in about seven days to control mites that were still eggs or in a resting stage during the first application.

Byline
Shawn Banks is a Consumer Horticulture Agent with NC Cooperative Extension. You may reach him at shawn_banks@ncsu.edu.