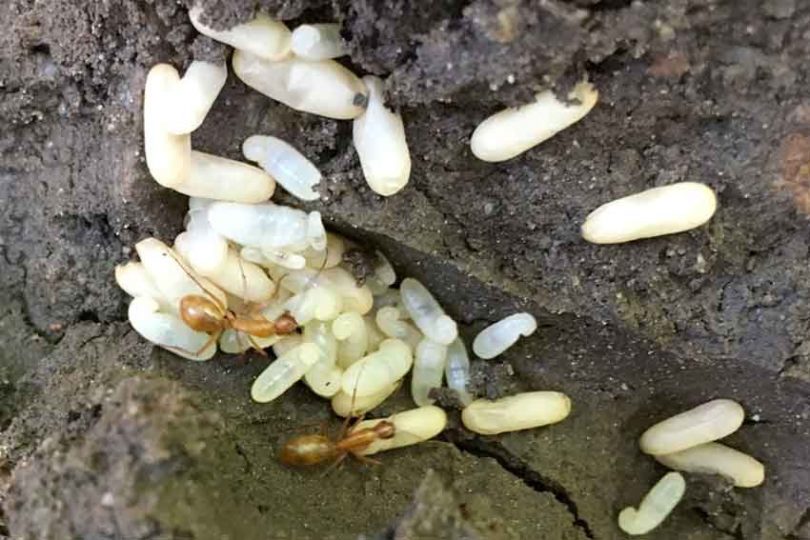 We usually only become aware of insects when we can see them. But what happens behind the scenes is often 90 to 99 percent of an insect’s lifetime.

Most insects we see only in their adult stage when they have wings and are reproductive. While some insects live above the ground throughout their lives, the real action for most insects is hidden underground or underwater.

Where are insects when we don’t see them, and what are they doing? Many insects have only one generation a year. That is it takes them an entire year to go through their life cycle. Some insects, notably many of our plant pests and mosquitoes, may go through numerous generations in a year, particularly when there’s plenty to eat and the weather is warm.

All insects have an egg stage. Although aphids produce clones of themselves through live birth, most aphid species can produce eggs. We may not notice the egg stage, even if it’s above ground. It’s usually a few days, depending on temperature.

Most insects spend most of their time as immatures, even those species that have a number of generations each year. These immature plant-feeding insects may cause substantial damage. We see caterpillars, the larvae of many moth and butterfly species, feeding on plant material above ground.

Many true bugs, those with piercing/sucking mouthparts, and others in the Hemiptera order (including aphids and scale insects), as well as insects in the grasshopper order (crickets, cockroaches and mantids), live their entire lives as juveniles and adults above ground.

Some beetles also live above ground through all life stages. But many beetles and lots of other insects, including many in the wasp (Hymenoptera) order, which includes ants and bees, live hidden during their juvenile stage. Hymenopteran larvae have no means of mobility and rely entirely on food supplied by their mothers or sisters (in the case of social insects) while tucked away in a cell or other protected place. Beetle larvae, often called grubs, are mobile and feed underground, with a few exceptions such as the Colorado potato beetle which feeds on plant foliage.

Some insects go through complete metamorphosis, where they transform radically between their larval and adult forms. This in-between pupal stage is quiescent, and often the pupa is buried under leaves if not underground. For many species, particularly those with only one generation a year, the individuals have a diapause—a pause in development—while waiting for the right environmental conditions to move on to the next stage.

Moths and butterflies enter diapause as pupae, while other species may experience diapause in the egg, last larval stage, or even as an adult in the case of beetles and Hemipterans. Diapause is always in a protected, usually hidden environment where temperature and moisture conditions predicate survival. Insects who have only one generation a year live most of their life in this state of suspended animation.

Immature and adult insects are active when there is food available. Above-ground leaf feeders are easily found, but many insects feed on roots, under bark, or encased where we do not see them. Adult insects’ primary business is reproduction.

The adults are the only winged stage, but many insect species live their entire lives underground where adults do not develop wings. While most of the insects we notice are winged, many of them live only a few days as adults. Some of them don’t feed as adults—their mouthparts are vestigial, remnants too small to be of any use.

This is not true of all adult insects. Japanese beetle adults, who chew above-ground foliage, go through only one generation per year. Most of their lives are spent underground as grubs, feeding on plant roots, notably of grasses. They feed below ground from August until June, pupate briefly and emerge as adults. Unless you are dealing with beetle grubs in your lawn, you really only notice the pesky adults.

We see ants tirelessly gathering food outside their mound. Inside the mound is a world of adults feeding larvae and their queen. Some ants spend their entire lives underground, and only winged, reproductive adults venture out into the air to mate and start new colonies. We never see the aphids and see the ants only once a year, usually in March, when winged adults are helped along by unwinged sisters to get to high enough perches, often on a foundation wall, to fly off and mate.

Adult mosquitoes feed on mammals, including us, but they live an aquatic life as larvae, feeding on detritus in still water. In the heat of summer, it may take little more than a week for a mosquito to go through its entire life cycle. Only a day or two is as an adult where the females are looking for a blood meal so they get the nutrition necessary for egg development.

Whether we find an insect pesky or beneficial, we often are keying in on only a small part of its life. Remember that the beautiful butterfly chewed on leaves before it was transformed.

Louise Romanow is an entomologist and a Wake County Extension Master Gardener.