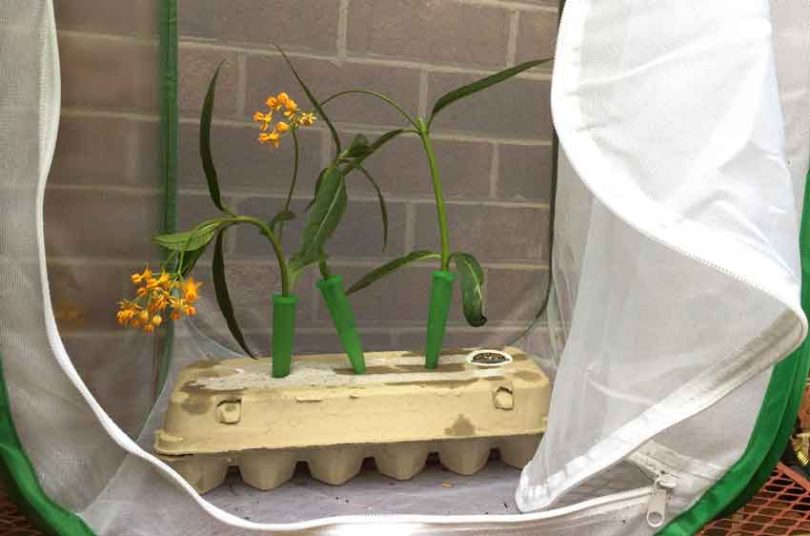 The flight of the monarch butterfly has given merriment to millions of observers. Their striking orange color could be part of this reason; monarchs are quite lovely. Most likely knowing about their migration navigation fascinates you. It’s hard to wrap our heads around the thought of a single insect making its way 3,000 miles to the mountains of Mexico to hibernate on oyamel fir trees.

Each year, fewer and fewer monarchs return to their winter hibernation site. In the last 20 years, the monarch butterfly population has declined by 90 percent with blips of growth in random years.

Year to year, it is hard to predict the numbers of growth or decline. In 2018, there was an actual increase in the numbers of monarchs in Mexico, but the question now is can this be sustained. With so many factors contributing to the decline, it is impossible to say.

How You Can Help the Monarch Butterfly

If we raised eggs or larvae in our garden, will we help the cause? If you read the experts, and I do, Chip Taylor, an emeritus ecology professor at the University of Kansas and director of Monarch Watch tells us, “The real reason for raising monarch butterflies is for the enjoyment, the education.” Taylor doesn’t believe individual efforts to raise monarch butterflies to adulthood will do much to restore the monarch population. His focus is on helping build habitats. But I ask you this: if we are encouraged to grow more milkweed and do, aren’t we helping build habitats as well? Of course, we are.

Raising monarch butterflies can be for more than just enjoyment or education. Did you know monarch eggs only have a five percent chance of reaching adulthood. Maybe I alone won’t make a dent in increasing the populations, but what if a thousand people did? What if a million people did? Local gardeners can be leaders. By growing more milkweed and raising eggs or caterpillars to adulthood, we will increase the adult survival rate from just five percent to nearly 95 percent. Don’t you think this is a worthy cause?

Duration of Each Life Cycle

All butterflies have four life cycles: egg, caterpillar, chrysalis, and adult. The amount of time spent within each cycle varies and is very much temperature-dependent. The warmer it is, the faster an adult monarch will emerge.

Egg: The egg cycle lasts from one to three days. I don’t tend to find a monarch at any stage until the larvae are big enough for me to find their frass. I guess I don’t have an eagle eye. But once I can see their poop on the milkweed leaves below, I know they’re there.

Caterpillar: The caterpillar stage can last from five to 15 days. As the caterpillar grows, their ending weight will expand to 3,000 times its initial weight. These little guys are eating machines. The monarch caterpillar has five instars (molts), each one lasting from one to three days each.

Chrysalis: The chrysalis stage lasts from 10 to 14 days.

Adult: An adult is expected to live for two months. When the adult monarch butterfly emerges, it is in a very vulnerable state. It takes two to four hours for its wings to fill and dry and is often done so by sunning with its wings open in the dorsal state. In this state, they are obvious and defenseless.

Predators may feed on eggs, larvae chrysalis, adults, or all the stages. A few to know are ants, aphids, assassin bugs, lizards, mice, lizards, mice, and mites as well as spiders, stink bugs, toads, and tachinid flies.

How to Raise Monarchs

We at Bee Better Naturally raise our monarchs in two chambers. A smaller chamber for eggs and the larvae up to one week old is a recommend. Keep them separate or otherwise they will be cannibalized.

First Chamber—Raising from eggs to one-week caterpillars: Check your milkweed daily for newly laid eggs. Remember, they will be on the underside of a milkweed leaf. Pluck the leaf with eggs and put it in the bottom of the first chamber.

Second Chamber—Raising from one-week caterpillars to chrysalis: Refresh milkweed as needed. Floral vials come in handy to keep milkweed clippings fresh longer. As the caterpillars exhaust the milkweed, refresh it. With a tall enough chamber, you can also just put a plant in there for feed. I keep extra one gallon plants around just for this purpose. Once the milkweed of one plant is exhausted, I trade it out for a fresh one.

It is essential to keep the bottom of the chamber clean. I recommend putting newspaper at the bottom to catch the frass. Change out as needed. Young caterpillars won’t poop big, but as the caterpillars grow, so does their frass. Replace the paper daily for good housekeeping. Good housekeeping is key to reducing the spread of disease.

If you do choose to raise monarchs, please grow lots and lots of milkweed. You’ll need it. Think of it this way: while you may think you have a lot of milkweed for those monarchs in your garden now, it may not be enough if you are rescuing them, thus increasing their chances of survival. More will live to adulthood. Plant extra milkweed.

A Word of Warning

A recent study using egg, larvae, and adults found that those purchased from a breeding house have lost their navigational abilities to fly south. The conclusion was mail-order butterflies come from stocks that haven’t migrated for generations, and they probably accumulated genetic changes that broke that ancestral ability.