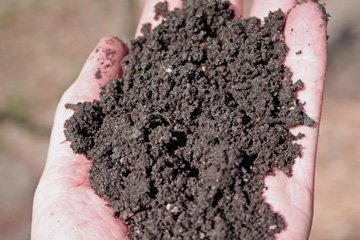 They’re known as red wigglers, tiger worms or, more scientifically, Eisenia fetida. They prefer dark places, but if the sunshine glances off their skin just right, their yellow stripes glow against their violet-brown coloration. I began using worms to turn food scraps into fertilizer about 3 years ago, when Raleigh’s “worm lady”, Susan Quinby-Honer, demonstrated a simple vermicomposting system at a local elementary school.

Scientific studies have proven that worm composting castings, or vermicompost, increases the seed germination rate and yield of crop plants. The fertilizer content of worm castings will depend on the food material being used; one study reported an N:P:K ratio of 1:3:9 for food waste vermicompost. The microbial activity in vermicompost improves soil structure, and releases plant growth regulators that stimulate root growth.

The worm-bin system I use works best when starting with about 1 pound of red-wiggler worms, some shredded newspaper, and decaying food scraps in a 10-gallon Rubbermaid type bin. Drill holes in the bottom and the sides of the bin, then place the bin in a second bin to catch any leachate (resulting liquid with contaminants) created by decaying fruits and vegetables. An entire system can be kept unobtrusively in a corner of the kitchen or other room.

When showing off my worm bins I am often asked if I added potting soil to the mix. No, the rich black earthy material is the worm castings. Amazing to think that the banana skin, carrots, apple or even cardboard that I threw in a few weeks ago is now a healthy mix of fertilizer, organic material, microbes, and plant growth regulators that I can add to my garden bed or house plants.

Admittedly, I was a bit turned off when I first saw a writhing mass of worms. Now I delight to see the worms as they mass together, working on a particularly tasty carrot or apple that became too ripe for my family, but just right for my worms. I found that my family of two adults and two children discards enough vegetable, fruit, newspaper, and cardboard waste to support five of the 10-gallon bins.

The bins require very little care. With multiple bins, I can have one or two in the finishing stages of composting. These sit undisturbed for a few weeks while the worms put the final polish on the compost. When ready, I dump the mix out onto the garden, retrieving as many worms as possible to start a new bin.

This summer I intend to try worm tea as pest control and fertilizer for my yard. Basically, worm tea is a mix of beneficial microbes and soluble material from worm castings. The tea is brewed overnight in a 5 gallon bucket by placing worm castings in a netted bag with dechlorinated water, a few teaspoons of black strap molasses and an aquarium bubbler. The population of beneficial microbes increases as the mixture bubbles. A cup of tea diluted with a gallon of water and sprayed on plant leaves is reported to repel pests. Any left over tea can be poured onto the garden where it will further enrich the soil with microbes, organic material and fertilizer.

Susan Quinby-Honer rid her yard of Japanese beetles by spraying the tea on her fruit trees. The tea also is purported as an alternative to fungicide for the control of black spot on roses.

More information on worm composting can be found at www.redhenenterprises.net. Also look for Susan Quinby-Honer demonstrating worm composting at the flower and garden show section of the North Carolina State Fair in October. The worms are available through Craig’s list and Red Hen Enterprises.

Byline:
Sharon Settlage credits her mother for her love of plants. A native of Georgia, Sharon studied botany and crop science at NC State. Her favorite plants are cacti and other succulents. Sharon can be reached at [email protected]